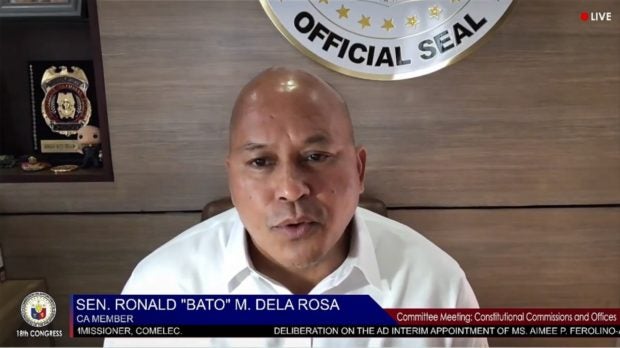 MANILA, Philippines — If the Commission on Human Rights has evidence to back its claims against the police involved in drug war operations, then it should present evidence and file cases in court.

“If they have the evidence then they should file appropriate charges in court otherwise their claims can be construed as black propaganda,” he added.

The senator made the remark when sought for comment on CHR’s reported findings that police allegedly used “excess, unreasonable” force and had the “intent to kill” suspects during drug-related operations.

Dela Rosa was at the helm of the Philippine National Police when the Duterte administration launched the bloody war against illegal drugs.

Asked why the CHR would engage in black propaganda, dela Rosa said: “ mere coincidence, the CHR and the opposition are trumpeting the same tune. (Election year) 2022 is fast approaching.”

According to CHR, it had investigated nearly 3,300 cases of alleged extrajudicial killings (EJKs) in the country between May 2016 and March 2021, where some 1,912 people were reportedly killed in police operations, while 1,382 others died in attacks by unidentified assailants.

Its initial findings were reportedly based on affidavits or statements of relatives of those reported  killed in police operations as well as on police and autopsy reports.

Under its charter, the independent constitutional body is fact-finding in nature and has no prosecutorial powers. It may only recommend to appropriate government offices such as the DOJ or the Ombudsman the filing of cases against state agents who may have committed rights abuses.