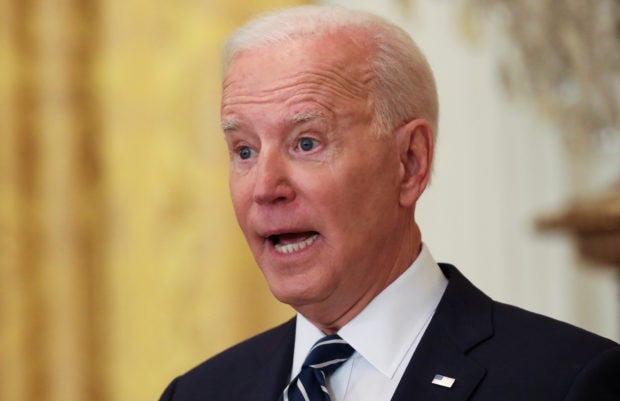 U.S. President Joe Biden answers a question as he holds his first formal news conference as president in the East Room of the White House in Washington, U.S., March 25, 2021. REUTERS/Leah Millis

WASHINGTON  – President Joe Biden said on Thursday the United States remained open to diplomacy with North Korea despite its missile tests this week, but warned there would be responses if North Korea escalates matters.

“We are consulting with our allies and partners, and there will be responses if they choose to escalate. We will respond accordingly,” Biden said.

“I’m also prepared for some form of diplomacy, but it has to be conditioned upon the end result of denuclearization,” he added, referring to the U.S. effort to persuade North Korea to give up its nuclear weapons.

Shortly after Biden’s remarks, the U.S. mission to the United Nations said the U.N. Security Council’s North Korea sanctions committee would meet on Friday, at the request of the United States, to discuss the North Korean launches.

The move suggested a measured response by Biden’s administration to the first tests since he took office in January, given that the meeting will be at a lower level than one held after North Korea last tested ballistic missiles a year ago.

North Korea launched two suspected ballistic missiles into the sea near Japan on Thursday, underscoring steady progress in its weapons program and ramping up pressure on Biden’s administration even as it reviews its North Korea policy.

The tests came just days after North Korea fired several cruise missiles in an exercise that Biden had played down as “business as usual”.

Asked if he agreed that North Korea was the top foreign policy issue he faced, Biden replied: “Yes.”

The Biden administration says it is in the final stages of a policy review after former President Donald Trump’s unprecedented engagement with North Korean leader Kim Jong Un, which failed to persuade Pyongyang to give up its nuclear weapons.

The current administration has been simultaneously signaling a hard line on human rights, denuclearization and sanctions, while making diplomatic overtures that administration officials say have been rebuffed by Pyongyang.

Analysts say the North Korean tests were likely a response to joint U.S. and South Korean military drills and Blinken’s recent visit to Japan and Korea, during which he criticized North Korea’s human rights record.

Victor Cha, a former White House official now at the Center for Strategic and International Studies think tank, said the scale of the North Korean tests had been measured so far compared with those at the start of the Obama and Trump administrations.

Cha said they could be a tactic aimed at extracting concessions for a return to the negotiating table.

Joel Wit, a fellow with 38 North, a Washington-based North Korea monitoring project, said some observers had predicted North Korean might return to testing intercontinental ballistic missiles, something is has not done since 2017.

“This falls far short of that,” he said.

Jenny Town, the director of 38 North, said Biden’s reference to denuclearization could explain why North Korea had ignored his administration’s overtures.

She said his language ignored principles set out in a joint declaration agreed between Trump and Kim at their first summit in Singapore in 2018, “that gave equal priority to peace building, normalization of relations and working toward denuclearization.”

“Bringing the focus of negotiations back to solely the nuclear issue is a step backward in diplomatic terms,” she said.

Biden called Kim Jong Un a “thug” during his election campaign, and said he would only meet him “on the condition that he would agree that he would be drawing down his nuclear capacity to get there.”