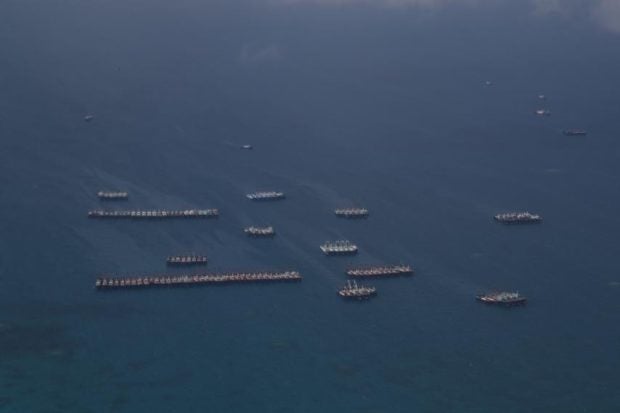 CHINESE FORMATION The Philippine government has protested the latest Chinese incursion in theWestPhilippine Sea where more than 200 vessels believed to be part of China’s maritime militia swarmed the Julian Felipe Reef within the Philippines’ exclusive economic zone. The military says there are still 183 of these boats as of Monday, as shown in this picture taken by an aerial patrol. —CONTRIBUTED PHOTO

MANILA, Philippines — A lawmaker on Wednesday questioned if there is a connection between China’s donation of coronavirus vaccines and the latest incursion of Chinese fishermen manned by militia personnel in the West Philippine Sea.

House Deputy Speaker Rufus Rodriguez said the sequence of events is curious, saying China’s donation of COVID-19 vaccines does not give it a license to violate the country’s’ territorial integrity.

“This sequence of events makes many of us wonder if there is a connection between the vaccine donation and China’s latest incursion in the West Philippine Sea, if we did not exchange marine resources for vaccine,” Rodriguez said in a statement.

“We are grateful to China for the donated vaccine but we must condemn in the strongest possible terms this newest intrusion into our EEZ (exclusive economic zone). The donation should not give them reason to enter our territory and violate our territorial integrity,” he added.

The government has since lodged a diplomatic protest against China for encroachment after some 220 Chinese militia vessels were spotted at the Julian Felipe Reef (Whitsun Reef), a territory being claimed by the Philippines on the WPS.

Rodriguez likewise questioned China’s claim that their fishing flotilla took shelter in the reef due to rough sea conditions.

“If that were the case, they should have left the area, because it has been more than two weeks since they were discovered. What are their intentions there?” Rodriguez said.

According to the House leader, who is a lawyer by profession, the Juan Felipe Reef, like the Chinese-occupied Scarborough Shoal off Zambales, “is part of our country’s exclusive economic and exploration zone (EEZ) under international law, and all resources in that area rightfully belong to the Filipino people.”

Thus, Rodriguez reiterated his appeal to the other lawmakers in the House, and eventually the Senate, to pass his bill defining the country’s maritime areas and territory for China to take notice of such delineation.

He said the enactment of the measure would also “counter the recent Chinese law allowing the Chinese Coast Guard to fire at perceived intruders in the entire South China Sea, which illegally includes our West Philippine Sea and a large part of our EEZ, from up north in Luzon to down south in the Palawan area.”

Under the Rodriguez bill, aside from its internal and archipelagic waters and territorial sea, the maritime territory of the Philippines includes its 200-mile EEZ that is measured from its shoreline and its continental shelf.