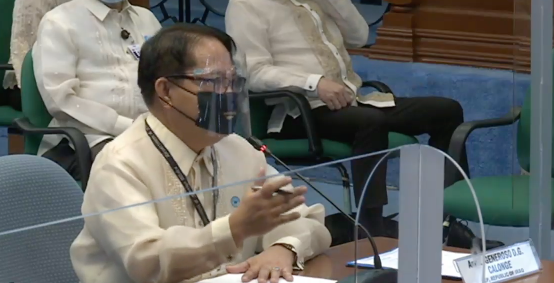 MANILA, Philippines — The country’s top diplomat to Iraq sees the presence of Chinese vessels in the West Philippine Sea as a violation of Philippine sovereignty, adding that a diplomatic protest is not enough to address such incursions.

Facing a panel of the Commission of Appointments (CA) on Wednesday for his confirmation as the country’s ambassador to Iraq, Chargé d’affaires Generoso Calonge underscored the need to further beef up the country’s military capabilities. Calonge served as an officer in the Philippine Army before joining the Philippine Foreign Service.

“Personally, I don’t intend to defeat China. That’s impossible. But I think if we can bloody them enough, that they would hesitate to look at us in a very condescending manner. We are capable of procuring the desired equipment,” said Calonge, who was previously an assistant secretary of the Department of Foreign Affairs (DFA) Maritime and Ocean Affairs Office.

It was Senator Risa Hontiveros who asked Calonge for his views on the presence of over 200 Chinese ships at the Julian Felipe Reef in the West Philippines Sea.

“My view about the presence of the 200 vessels, if true, if verified, if correct…It is a violation of our sovereignty and appropriate measures should be done in order to address this violation. I understand that a protest has already been lodged but I am not sure if a protest is enough,” Calonge said.

“I understand from public media that our modernization of the Armed Forces is in full swing. In my view as a taxpayer, as an individual, not as a diplomat, I view incursions into our territory as violations of our sovereignty, this must be addressed appropriately,” he added.

‘Diplomacy has a limit’

Hontiveros then asked Calonge of other measures that could be taken to address Chinese incursion in Philippine waters aside from the filing of a diplomatic protest.

“My view is two-pronged, personal views. One is to develop our armed forces so that we won’t be taken very lightly by those near our borders…Involve our alliances not only in the region and with the only Mutual Defense Treaty (MDT) ally that we have and that is the United States,” the DFA official said.

“For example in terms of weaponry, we may wish to have missiles, mobile missiles in Palawan so that in case of an armed attack, we can invoke the MDT because that would be an attack to Philippine metropolitan territory as provided for in the MDT,” he added.

Further, he stressed the importance of continuing diplomatic engagements.

“The other side of the coin of my suggestion is to continue with our diplomatic engagement. But I think diplomacy has a limit. When push comes to shove, I think it is your strength that will show in the end,” Calonge said.

“For example, Mischief Reef and Scarborough Shoal are not with us anymore and I think until we as a nation can recover those two features, we cannot restore status quo ante and that is very sad for the Republic,” he added.

On Sunday, Mar. 21, Manila filed a diplomatic protest over the presence of the vessels, believed to be manned by Chinese maritime militia personnel.

Following the protest, the Chinese Embassy in Manila denied the alleged presence of Beijing’s maritime militia at the said reef, which it claims is part of Nansha Qundao, one of two political districts in the South China Sea established by the Chinese government in 2020.

But the DFA, in a strongly-worded statement, asserted that the Julian Felipe Reef lies within the Philippines’ exclusive economic zone (EEZ) and demanded that China immediately withdraw its vessels and maritime assets in the West Philippine Sea.