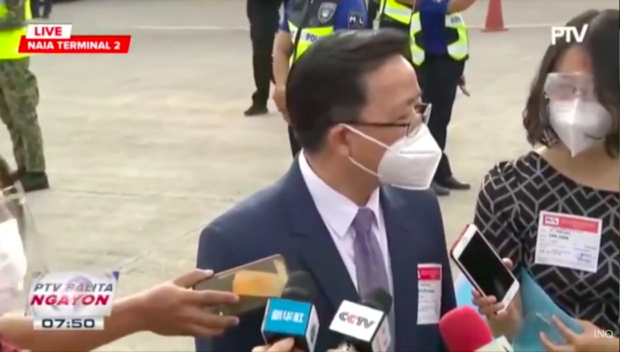 Chinese Amb. Huang Xilian talks to the media at the sidelines of the arrival of the 400,000 additional Coronavac doses donated by China. Screengrab from PTV

MANILA, Philippines — China on Wednesday insisted that there is no Chinese maritime militia at the Julian Felipe Reef in the West Philippine Sea, saying such speculation “is not helping.”

“As we issued a statement the day before yesterday, Chinese fishing vessels have been fishing in the area for many many years. Now, those vessels are taking shelter in that part of the sea. I think it’s a quite normal activity,” Huang said in an interview on the sidelines of the arrival of 400,000 more CoronaVac doses donated by China.

“There is no such militia vessel as claimed by some people. Any speculation is not helping,” he added.

On Sunday, Mar. 21, Manila filed a diplomatic protest over the presence of around 220 vessels, believed to be manned by Chinese maritime militia personnel.

Despite the protest, the ships remained moored at the reef located just around 175 nautical miles west of Bataraza, Palawan.

Malacañang has said President Rodrigo Duterte intends to talk to Huang over the incident.