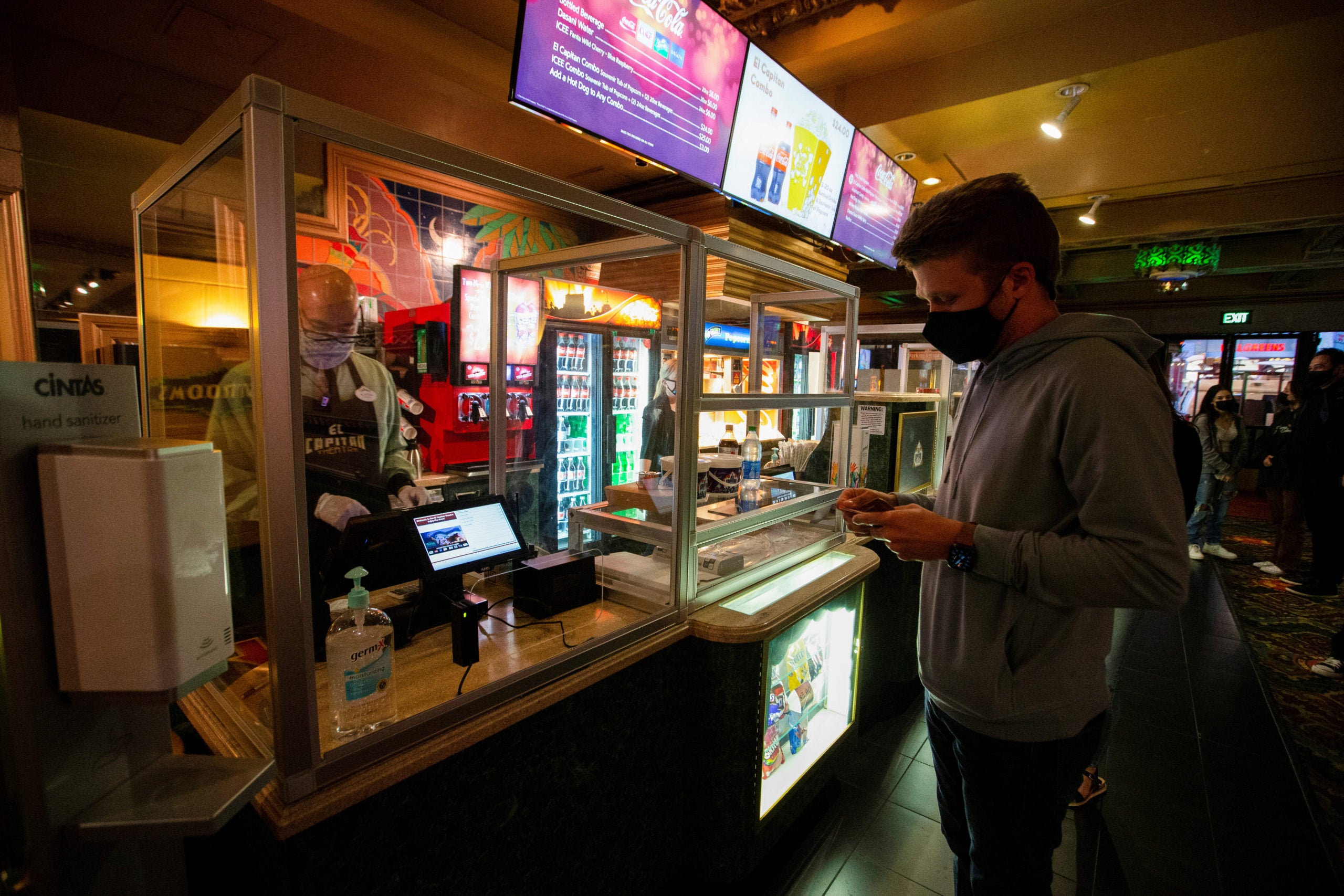 A moviegoer shops at concession stands retrofitted with plexiglass partitions before the movie “Raya and the Last Dragon” on the reopening day of El Capitan theatre during the outbreak of the coronavirus disease (COVID-19), in Los Angeles, California, U.S., March 19, 2021. REUTERS/Mario Anzuoni

LOS ANGELES – Disney’s animated adventure “Raya and the Last Dragon” led the domestic box office in its third weekend, illustrating the appeal of family films as Hollywood attempts to mount a moviegoing revival.

“Raya and the Last Dragon” collected $5.2 million from 2,261 theaters through Sunday, representing a scant 5% decline. Disney can thank the reopening of Los Angeles movie theaters for the stellar hold in ticket sales. Cinemas in the City of Angels were given permission to resume operations on March 12, but most film exhibitors weren’t able to get up and running until now.

Capacity in Los Angeles area movie theaters will be capped at 25%, or 100 people per auditorium, which is double the limit in New York, where its restricted to 50 people. Even with restrictions, Los Angeles accounted for nearly 9% of all movie tickets sold this weekend, according to Comscore.

AMC Theatres, the cinema chain with the biggest footprint in the country, has reopened 98% of its locations, including 40 venues in California, as of March 19. The circuit expects to reopen even more locations by March 26.

“It was exactly one year ago that we closed all AMC locations in the United States,” said Adam Aron, the CEO of AMC. “It gives me immense joy to say that by the end of next week we expect that 99% of our U.S. locations will have reopened.”

“Raya and the Last Dragon” amassed another $8 million overseas from 29 countries. The film, which is available to Disney Plus subscribers for an additional $30, has generated $71 million globally to date.

Without much in the way of competition, “Raya and the Last Dragon” was able to easily repeat No. 1 in North America. Two new movies — “The Courier” and “City of Lies” — opened theatrically while several awards season hopefuls got a post-Oscar nomination boost.

Focus Feature’s dark comedy “Promising Young Woman,” which landed five Academy Award nominations, enjoyed a 117% increase in ticket sales, with $195,000 over the three days for a total of $5.7 million. And A24’s “Minari,” a heartwarming drama about a Korean American family that scored six Oscar nods, saw receipts climb 85%. The film earned $306,000 this weekend, bringing its tally to $1.3 million. Sony Pictures Classics’ “The Father,” the only best picture nominee to have a traditional theatrical release, made another $275,000 following nominations, lifting its total sales to $879,000.

“Raya and the Last Dragon” wasn’t the only title that witnessed a modest decline in ticket sales; none of the films in the top five dipped more than 15% from the weekend prior.

Warner Bros.’ live-action-animated hybrid “Tom and Jerry” remained in second place with $3.8 million from 2,508 screens, a 7% drop from last weekend. The film, which is also playing on HBO Max for 31 days, has made $33 million at the domestic box office. Internationally, “Tom and Jerry” added another $4 million, bringing its overseas tally to $43.5 million and global haul to $77.2. million.

At No. 3, Lionsgate’s sci-fi thriller “Chaos Walking” took in $1.9 million from 2,132 theaters, marking a slight 14% fall. After three weeks of release, the Daisy Ridley and Tom Holland-led film has made $9.69 million. Universal’s “The Croods: A New Age” rounded out the top five with $620,000 from 1,411 screens. The animated family film has made $55 million since it was released last November. Globally, “The Croods” sequel has made $160 million.