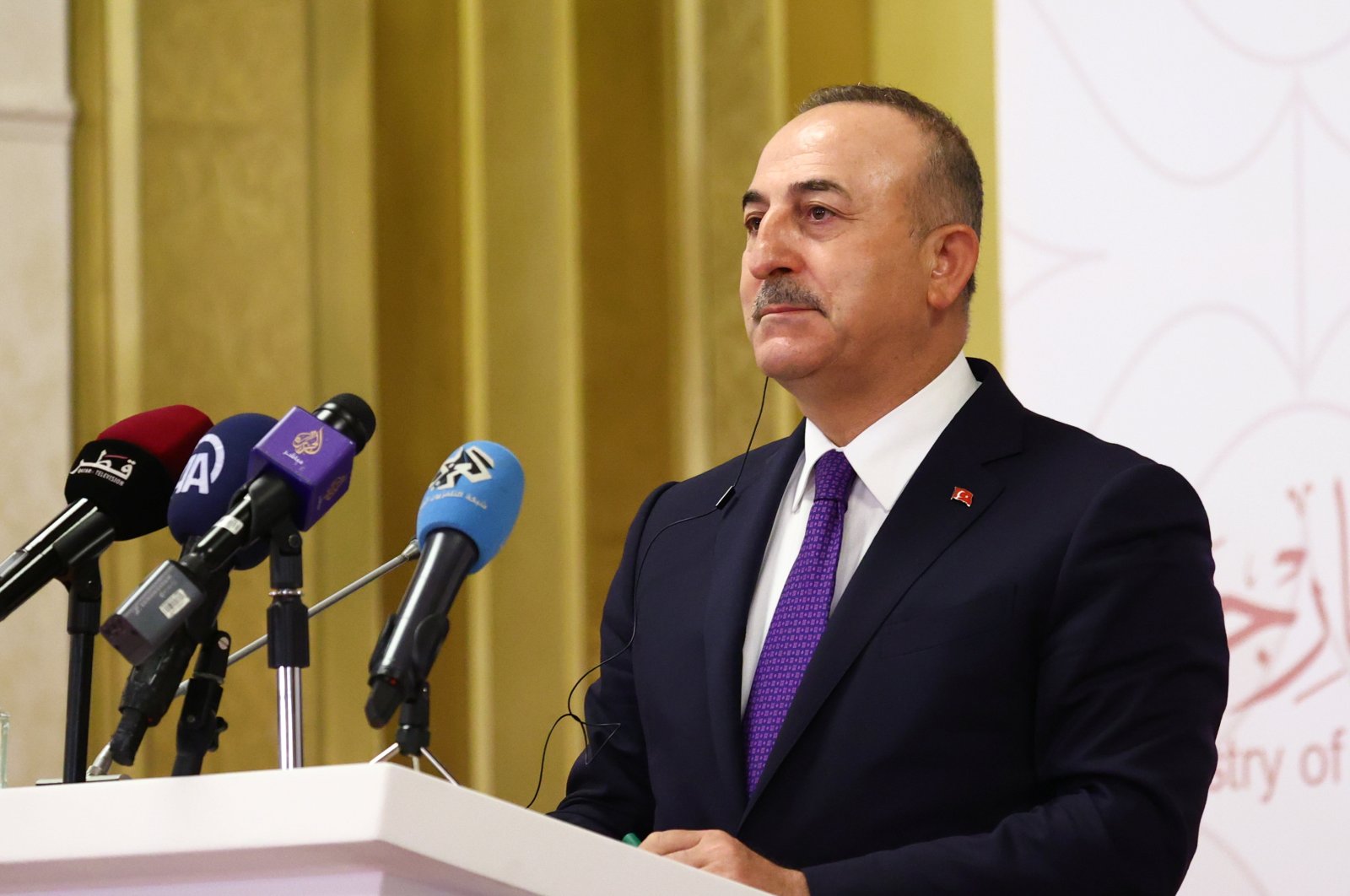 Turkey and Egypt have made diplomatic-level contact after a yearslong hiatus that began with the disruption of relations in 2013, Foreign Minister Mevlüt Çavuşoğlu announced Friday.

Speaking to reporters during his return from Qatar, Çavuşoğlu said: “We have made contact with Egypt at both the intelligence and foreign ministry levels. Contact has also been started at the diplomatic level.”

Noting that neither side put forward preconditions, the top diplomat said ties that have been cut for years could not be mended at once and easily.

He said having a lack of trust is also normal in such situations and may occur for both parties.

“For this reason, negotiations take place and continue under a certain strategy, a road map,” Çavuşoğlu said as quoted by Anadolu Agency (AA).

Following Çavuşoğlu’s remarks, President Recep Tayyip Erdoğan on Friday stated that the cooperation with Egypt in the fields of intelligence, diplomacy and economy continues.

Turkey’s foreign minister earlier this month said that Turkey may negotiate a maritime demarcation agreement with Egypt in the Eastern Mediterranean, depending on the condition of bilateral ties. Following this, Defense Minister Hulusi Akar said Egypt’s decision to respect Turkey’s continental shelf while carrying out seismic exploration in the Mediterranean Sea is an important development. Presidential Spokesperson Ibrahim Kalın also last week described Egypt as the brain and heart of the Arab world and said that Turkey could turn a new page with Cairo and the Gulf countries.

Recently, Greek media reported that Egypt’s announcement of holding a tender for hydrocarbon exploration in the Eastern Mediterranean by recognizing the exclusive economic zone (EEZ) demarcated by Turkey could be a sign of a possible agreement between Ankara and Cairo on the issue. Greek daily Kathimerini said last month that in the eastern zone of the tender map, Egypt has paid attention to the continental shelf declared by Turkey to the United Nations after the agreement between Turkey and Libya in November 2019. The newspaper said that Cairo’s move could be interpreted as its reservation to get involved in the controversy about the Turkish-Greek continental shelf in the region, especially around the island of Cyprus. Kathimerini also said that even though this move would not lead to an immediate reconciliation, it indicates that Cairo has left the door open to Ankara for future talks.

In November 2019, Turkey and Libya signed a maritime delimitation deal that provided a legal framework to prevent any fait accompli by regional states. Accordingly, the attempts by the Greek government to appropriate huge parts of Libya’s continental shelf, when a political crisis hit the North African country in 2011, were averted. In response, Egypt and Greece signed an agreement in August 2020, designating an EEZ in the Eastern Mediterranean between the two countries.

The relations between Turkey and Egypt deteriorated after Gen. Abdel-Fattah el-Sissi toppled the country’s first democratically elected president, Mohammed Morsi, in a coup after only a year in office. Ankara has maintained its position that a democratically elected president cannot be deposed by a military coup and thus has voiced its criticism of el-Sissi and his backers, including the West and some of Ankara’s rivals in the Gulf region. The Egyptian government, on the other hand, urged Turkey not to intervene in an issue that it considers as belonging to the country’s internal affairs. The dispute led to bilateral relations remaining deadlocked for many years. Recently, however, signs of a possible reconciliation have come from both countries, particularly due to the changing dynamics in the Eastern Mediterranean and the Turkey-Greece crisis over the region’s energy resources.

Regarding the recent offer by the United States to the Turkish government to host a senior-level meeting between Afghan government representatives and the Taliban in the coming weeks to finalize a peace agreement, Çavuşoğlu said Turkey had been involved in the process since the beginning.

Last week, U.S. Secretary of State Antony Blinken, in a letter to Afghan President Ashraf Ghani, said Washington intends to ask the U.N. to convene foreign ministers and envoys of Russia, China, Pakistan, Iran, India and the U.S. to discuss how to promote peace in Afghanistan.

Turkey is trusted by both parties of the negotiations, Çavuşoğlu said. He noted, “Both the Taliban and the negotiation delegation, meaning the government side, had asked us to host such a meeting before.”

He stressed that Turkey would also appoint a special envoy to Afghanistan to contribute to the process.

The top diplomat added that the meeting will not be an alternative to the Qatar process but will be a supporting one.

“We will do this (meeting) in coordination with brotherly Qatar,” he said, adding that the aim is to enable the negotiations to continue in a result-oriented manner.

Çavuşoğlu said he believes that Turkey will contribute significantly to the meeting, which is planned to be held in Istanbul in April.

Ankara has recently expressed its readiness to take part in mediation efforts for peace in Afghanistan and the region.

This came after a diplomatic letter leaked by Afghanistan’s Tolo News suggested that the U.S. would ask Turkey to host the peace talks.

Peace negotiations between the Afghan government and the Taliban insurgents in the Qatari capital of Doha have largely stalled as U.S. President Joe Biden’s administration reviews how to handle the peace process, including troop withdrawal.

The U.S. is set to withdraw from Afghanistan in May, but a surge in fighting has sparked concerns that a speedy exit from the country may unleash greater chaos as peace talks between the Kabul government and the Taliban continue to flounder.

Ankara has recently conveyed that Turkey will continue supporting Afghan security. Turkey has been contributing to the security of Afghanistan and will keep its presence in the country as long as its Afghan brothers demand it, Çavuşoğlu said last week, marking the 100th anniversary of diplomatic relations between the two countries.

The Turkish Parliament in late 2020 approved a motion to extend the deployment of Turkish troops in Afghanistan for 18 months as part of NATO’s support mission in the war-torn country. The initial legislation, which took effect on Jan. 6, 2019, allowed the Turkish government to send troops to Afghanistan to support the NATO-led mission Resolute Support. After ending the 17-year combat mission in Afghanistan in 2018, the mission has evolved into a training and advisory program for the nascent Afghan security forces.

Touching on new processes between Saudi Arabia, the United Arab Emirates (UAE), and Qatar, Çavuşoğlu said such a process would benefit relations with Turkey as well.

“Recently, we see positive messages from Abu Dhabi. We see that the negative campaigns against Turkey have decreased,” he said, adding that Ankara already did not have any problems with the UAE but it had a negative approach towards Turkey.

Saying that Ankara also has no bilateral problems with Riyadh, Çavuşoğlu said that after Saudi journalist Jamal Khashoggi was killed in fall 2018, Saudi Arabia made the case into a bilateral problem.

“Actually this was not a bilateral issue. It was a search for justice for the deceased and we said, Let the perpetrators of the murder face justice and let justice be served,” he explained.

“We have never accused the Saudi administration,” he said.

Citing his “fruitful” meeting last November with his Saudi counterpart Faisal bin Farhan in Niger, Çavuşoğlu said: “We agreed to continue the dialogue.”

“For us, there’s no reason for not mending our ties with Saudi Arabia. If they take a positive step, we will do so as well. The same goes for the UAE,” he stressed.