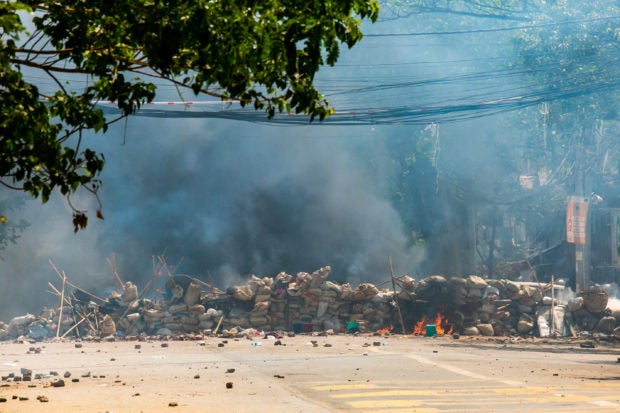 Makeshift barricades are burnt by protesters in an attempt to obstruct soldiers during a crackdown by security forces on a demonstration against the military coup in Yangon’s Thaketa township on March 19, 2021. (Photo by STR / AFP)

Myanmar has been in turmoil since the military ousted civilian leader Aung San Suu Kyi on February 1, triggering a mass uprising that security forces have sought to crush with a campaign of violence and fear.

The junta has also gone after the country’s press corps, revoking the licenses of five independent local broadcasting services, raiding newsrooms, and arresting journalists working to cover the news.

“We are extremely concerned about our BBC News Burmese Reporter, Aung Thura, who was taken away by unidentified men,” it said.

The British broadcaster said he disappeared around midday, and that it was doing everything it could to locate him.

“We call on the authorities to help locate him and confirm that he is safe,” the statement added.

Local media outlet Mizzima also said that one of its reporters, Than Htike Aung, was “arrested” in the capital Naypyidaw on Friday, according to its official Facebook page.

The two reporters were together when they were taken.

Since the coup, more than 30 journalists have been arrested, according to the Assistance Association for Political Prisoners monitoring group.

Among the detained is Thein Zaw, a photojournalist with the Associated Press, who has been charged with “causing fear, spreading false news or agitating directly or indirectly a government employee”.

‘Turn into a pile of ash’

Even as security forces have deployed tear gas, rubber bullets, and live rounds to quell dissent, demonstrators across the country have pushed on to demand a return to democracy.

On Friday, at least two more protesters were killed in a small trading town in northeastern Myanmar, a funeral home employee told AFP by phone.

He added that more had died, but “we have not picked up the bodies because there is still shooting”.

In neighboring Kayah state, a bystander was killed when security forces opened fire on a protest, a rescue worker told AFP.

The fresh violence brings the death toll in Myanmar since the coup to near 230, according to the Assistance Association for Political Prisoners monitoring group.

Yangon, Myanmar’s former capital and commercial hub, remains one of the key spots of unrest — with the junta imposing martial law over six townships this week.

But much of Yangon has descended into chaos, with security forces patrolling and opening fire randomly in residential areas — like Tamwe and Thaketa, both hard-hit protest areas, on Friday.

A Facebook video shot by a Tamwe resident — verified by AFP — showed dozens of soldiers and police opening fire repeatedly and slowly stalking down a street as they shouted at people to “come out”. 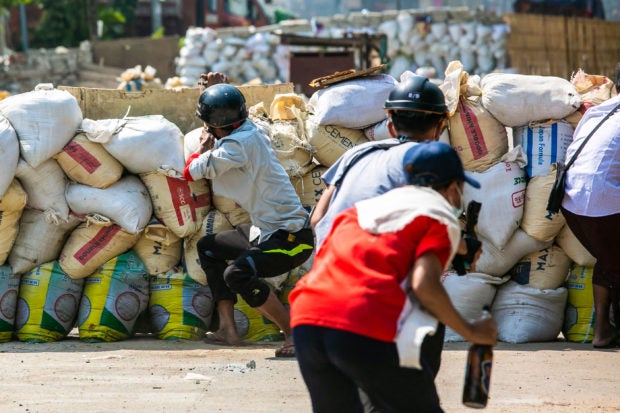 A protester uses a slingshot as he takes cover behind makeshift barricades during a crackdown by security forces on a demonstration against the military coup in Yangon’s Thaketa township on March 19, 2021. (Photo by STR / AFP)

Several terrified residents told AFP they have either left Yangon already or are planning to leave for rural areas.

“I no longer feel safe and secure anymore — some nights I am not able to sleep,” a resident near one of the districts where security forces have killed protesters this week told AFP.

“I am very worried that the worst will happen next.”

One resident told AFP he feared being shot by security forces, who had been threatening people if they did not clear barricades.

“We are like house rats searching for something to eat in another person’s kitchen,” said one man who described the fear of leaving his house this week to get milk for his two children.

Mobile data across Myanmar has also been down since Monday, plunging those without Wifi into an information blackout.

Foreign ambassadors — including the US and former colonial power Britain — said Friday in a statement that the “brutal violence against unarmed civilians… is immoral and indefensible”.

Across the Myanmar border in Thailand’s Tak province, authorities said they were preparing shelters for an influx of potential refugees.

“If many Myanmar people flow across the border because of an urgent case, we have prepared the measures… to receive them,” said provincial governor Pongrat Piromrat.

He said Tak province would be able to support about 30,000 to 50,000 people, though he confirmed that no one appears to have flooded across the border yet.

About 90,000 refugees from Myanmar already live along the porous border, fleeing decades of civil war between the military and ethnic armed groups.

The junta has repeatedly justified the power seizure by alleging widespread electoral fraud in November’s elections, which Suu Kyi’s National League for Democracy (NLD) party swept in a landslide.