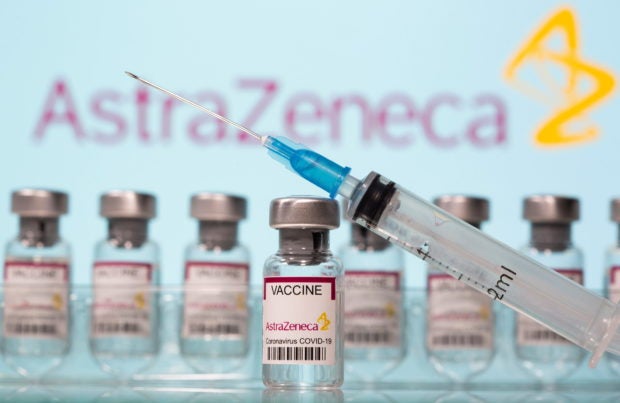 Vials labelled “AstraZeneca COVID-19 Coronavirus Vaccine” and a syringe are seen in front of a displayed AstraZeneca logo in this illustration taken March 10, 2021. REUTERS/Dado Ruvic/Illustration

GENEVA, Switzerland  – World Health Organization experts on Wednesday recommended countries continue to use the AstraZeneca vaccine, but said they were looking into the jab’s safety after a slew of countries suspended its use over health fears.

The WHO, Europe’s medicines regulator and AstraZeneca itself have repeatedly said the vaccine was safe after several countries reported feared links with blood clots or brain haemorrhages.

The suspensions have marred the global vaccine drive aimed at ending a year-long pandemic that has already killed more than 2.6 million people around the world since it first emerged in China in late 2019.

But the WHO’s vaccine experts said Wednesday it was still better to take the AstraZeneca vaccine than not — adding that it was looking into available data on the jab.

“The WHO Global Advisory Committee on Vaccine Safety is carefully assessing the latest available safety data,” the UN health agency said in a statement.

“At this time, WHO considers that the benefits of the AstraZeneca vaccine outweigh its risks and recommends that vaccinations continue.”

The recommendation echoed a similar statement from the European Medicines Agency on Tuesday advising countries to continue using the vaccine, saying there was no link with clots.

The Amsterdam-based agency said in a statement is holding an extraordinary meeting Thursday to finalise its conclusions on the blood clot issue and “make any necessary recommendations for further action”.

Several countries from France to Venezuela to Indonesia said they would not use the vaccine after several reports emerged of blood clots and brain haemorrhages in people who had received the vaccine.

The British-Swedish jab has been dogged by controversy from early on in its rollout, after some countries initially recommended it for people over the age of 65 and then backpedalled, saying there was insufficient data for people in the age group that had received the shot.

The firm later sparred with the EU, which accused it of failing to fulfil vaccine contracts after the bloc’s immunisation campaign came under fire for a sputtering start.

‘Crisis of the century’

The head of the EU Commission on Wednesday threatened to introduce export curbs to stop suppliers within the EU from sending jabs outside the bloc to ensure “reciprocity” from other vendors.

Ursula von der Leyen singled out Britain, which she accuses of operating a de facto export ban to achieve its own vaccine success at home, which London furiously denies.

She said the EU was “still waiting” for its AstraZeneca orders to come out of production sites in Britain, despite the fact that 10 million doses from other manufacturers had entered the United Kingdom from the EU.

“This is an invitation to show us that there are also doses from the UK coming to the European Union, so that we have reciprocity,” she said.

The warning came as the EU chief also unveiled plans for a digital certificate that could allow people who have been vaccinated to travel freely withing the bloc.

The pass could also apply to people with a recent negative test, or who have been previously infected and therefore are presumed to have antibodies, she said, calling the pandemic “the crisis of the century”.

Governments are hoping that vaccines will clear the path to a return to normal, more than a year into the pandemic that has plunged the world into a devastating recession and subject much of humanity to some sort of anti-virus restrictions.

In Ireland, St Patrick’s day celebrations were dampened for a second year running with the country still facing restrictions — after the first wave of anti-virus measures shut the party down last year.

“It’s a year on now and… we seem to be back where we started,” said publican Tom Cleary, perched on a barstool in Dublin next to a Guinness tap fashioned in the shape of the Celtic harp.

“It’s sad there’s no end in sight,” he told AFP. “I mean, will we be here next St Patrick’s Day with the same problems?”

More than 382 million doses of vaccine have been administered globally, the vast majority in wealthier countries while many poorer nations have yet to receive a single jab.

AstraZeneca’s shot, among the cheapest available, was billed as the vaccine of choice for poorer nations and the clot reports have had an impact beyond Europe.

The suspensions come as some countries see worrying new caseloads, including in Iraq and India, where Prime Minister Narendra Modi called for “quick and decisive steps” to halt a new wave of infection.

In France, President Emmanuel Macron was to decide Wednesday whether to impose a weekend lockdown on the Paris region as it faced its own third wave of infections that have bloated hospital ICUs.

And Poland announced a three-week partial lockdown of its own, while in the South Pacific the health minister of Papua New Guinea issued an urgent appeal for vaccines to stave off a wave of new infections.

“The community transmission is out there, and I’m pretty sure that we haven’t detected a lot of it,” Jelta Wong told AFP, saying his country was “running at full throttle” to prevent further spread.