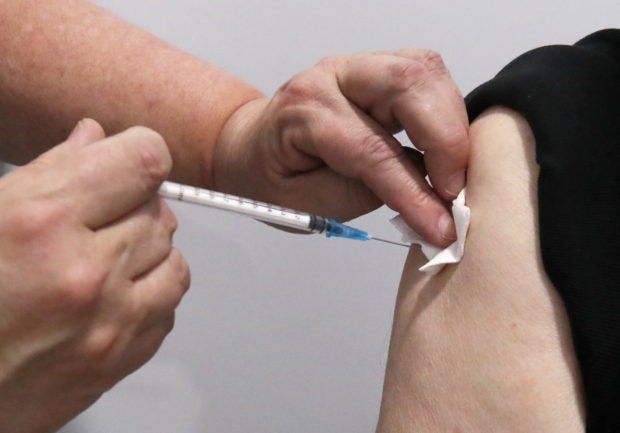 A person receives a dose of Oxford/AstraZeneca’s COVID-19 vaccine at a vaccination centre in Antwerp, Belgium March 18, 2021. REUTERS/Yves Herman

AMSTERDAM/LONDON  – Germany, France and other European nations announced plans to resume using AstraZeneca’s COVID-19 vaccine on Thursday after EU and British regulators moved to shore up confidence in the shot, saying its benefits outweigh the risks.

Reports of rare brain blood clots had prompted more than a dozen nations to suspend use of the shot, the latest challenge for AstraZeneca’s ambition to produce a “vaccine for the world”, as the global death toll from the coronavirus passes 2.8 million.

The European Medicines Agency’s (EMA) “clear” conclusion following an investigation into 30 cases of unusual blood disorders was that the vaccine’s benefits in protecting people from coronavirus-related death or hospitalisation outweighs the possible risks, though it said a link between blood clots in the brain and the shot could not be definitively ruled out.

“This is a safe and effective vaccine,” EMA director Emer Cooke told a briefing. “If it were me, I would be vaccinated tomorrow.”

Within hours, Germany said it would resume administering the AstraZeneca vaccine from Friday morning. Health Minister Jens Spahn said suspending the vaccine out of caution had been the right call “until the clustering of this very rare type of thrombosis had been examined.”

France too said it would resume use of the vaccine, with Prime Minister Jean Castex saying he would receive the shot himself on Friday afternoon.

Italian Prime Minister Mario Draghi said Italy would do the same, and that his government’s priority remained to vaccinate as many people as quickly as possible.

Spain said it was evaluating a possible resumption, while Cyprus, Latvia and Lithuania said they would restart administering the vaccine.

Many governments had said the decision to pause inoculations was out of an abundance of caution. But experts have warned political interference could undermine public confidence in vaccinations as governments struggle to tame more infectious virus variants.

“We trust that, after the regulators’ careful decisions, vaccinations can once again resume across Europe,” said AstraZeneca Chief Medical Officer Ann Taylor in a statement.

The EMA’s review covered 20 million people given the AstraZeneca shot in the UK and the European Economic Area (EEA), which links 30 European countries.

Safety concerns had led at least 13 European countries to stop administering the shot, slowing an already faltering inoculation campaign in the EU, which lags Britain and the United States.

Britain’s Medicines and Healthcare products Regulatory Agency (MHRA) said earlier that it was investigating five cases of the rare brain blood clot that had been reported out of 11 million shots administered in the UK.

It said it would investigate reports of clots in the cerebral veins (sinus vein thrombosis, or CSVT) occurring together with lowered platelets soon after vaccination. But the agency said use of the vaccine should continue and one official said Britain’s rollout would likely continue even if a link was proved.

The AstraZeneca shot was among the first and cheapest of the COVID-19 vaccines to be developed and launched at volume and is set to be the mainstay of vaccination programmes in much of the developing world.

“The EMA’s (verdict) now provides clarity about the safety of this vaccine, which should now be vaccinated at a high rate after this safety stop in order to efficiently prevent the actual risk, i.e. sometimes serious medical harm from Covid-19,” said Clemens Wendtner, head of infectious diseases at Munich clinic Schwabing.

The drugmaker’s own review covering more than 17 million people who have received its shot in the EU and Britain found no evidence of increased risk of blood clots.

The World Health Organization this week also reaffirmed its support for the shot.

The EMA said it would update its guidance on the AstraZeneca vaccine to include an explanation for patients about the potential risks and information for healthcare professionals.

The agency said it is in touch with regulators around the world to keep tabs on possible side effects of all COVID-19 vaccines.