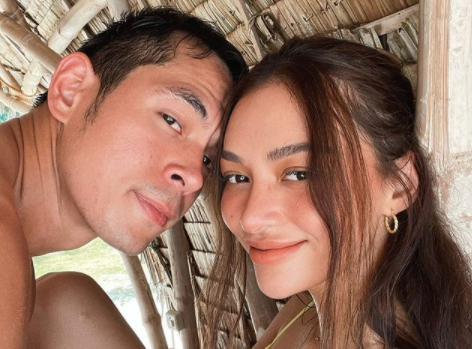 The viral video of actor Jake Cuenca appearing to play a proposal prank on his girlfriend Kylie Verzosa during a romantic dinner date in Palawan had been well thought out and planned beforehand by the couple. The lovers even shot a “Take 2” of the controversial video, Jake told Inquirer Entertainment.

“It was a joke,” insisted Jake, as he would repeatedly say in this exclusive interview.

“Our friend James told us early on, during the morning, that they will have a surprise for us that night. Even though we got a heads-up, we still got surprised with the beautiful setup they did for us. So we joked about it. I asked Kylie, ‘Grabe! Can you imagine if I proposed to you here?’ It was a joke. In fact, we even took the video twice!” Jake declared.

The video, which Jake uploaded on Feb. 26 on his Instagram account, showed him and Kylie about to have a candle-lit dinner. He then came up to Kylie to say, “So I prepared this because I just want to ask you one thing …” Kylie appeared excited as she waited for Jake to continue, only to be asked, “Kumain ka na ba?” (Have you eaten?)

Jake’s followers commented that the proposal prank had been “insensitive” of Kylie’s feelings and that it was a “bad joke.” Kylie, on the other hand, was quick to say (in a comment on the same post of Jake’s) that her feelings weren’t hurt at all and that Jake “has been the best boyfriend” to her.

Asked to react to the fact that he got so much flak on social media after posting the video, Jake said: “I didn’t want to have to explain myself too much. It was very difficult because I know perfectly well that I didn’t hurt my girlfriend’s feelings at all. Who was I to apologize to? To the people whose feelings got hurt by the video, I’m sorry; but my girlfriend wasn’t because she knew it was a joke.”

He further said: “If you watch her vlog, you can see that it wasn’t a big deal to her. After that joke, we still spent many more days in Palawan. I understand that people are a bit sensitive right now because we’re dealing with a lot of different issues lately and that we’re still in a pandemic. It was never an issue for me and Kylie. We didn’t hurt each other. She was fully aware that we will be doing a video like that.”

Jake insisted that he was never insensitive toward his girlfriend’s feelings, “Because we’re still not in that stage in our relationship. We’re happy where we are. No pressure. We still have goals. We still want to enjoy our relationship before we decide to take the next step.”

When we asked Jake to share something about his “personal goal,” he replied: “Every actor dreams of a bigger audience, an undeniable performance that the whole world will see. That’s my dream. But also, aside from acting—Kylie knows this—I want to go back to school and study filmmaking. I plan to do this once we are all allowed to travel again. Of course, you want to do this early on in your life so that when you finally decide to go to that next step in your relationship, you already have a strong foundation. I imagine that it will be harder to do these things once you’ve already taken that next step (marriage),” he explained.

Dealing with bashers and critics is nothing new to Jake and Kylie. In fact, Kylie recently had to publicly explain why she chose to have a “live-in” setup with Jake. When this was brought up in the interview, Jake had wanted to share his two cents’ worth, too.

“Obviously, we’re no longer teenagers. [We decided to live together because] we can and because we’re adults. I’m actually thankful that it happened in 2020, during the pandemic, because we were able to build a stronger foundation in our relationship,” he declared.

Looking back, Jake said he now finds it funny that it was actually Kylie who tried to console him after the backlash that he got from the supposed prank video. “While everyone seemed to be on her side, defending her, Kylie told me, ‘You didn’t do anything wrong. It’s OK.’ I then told her that I’ve been through worse and that it was fine. I also appreciated that she posted stuff to defend me. She had wanted to do more, but I told her, ‘Stop na, and let’s just move on from it. There will be a right time to address it, like right now,’” said Jake.

“It’s always hard to explain your side on social media. What you say will only get twisted in so many different ways,” he told Inquirer Entertainment. “Unlike right now, we’re talking about it and I’m just telling you exactly how I feel.”

In order to cope with all the negative vibes that came his way, Jake said he simply changed his perspective. “We just came from an amazing trip to Palawan—that’s a fact. Before the issue, we were simply walking our dogs and being ‘normal’ happy. When an issue comes, I’m not going to lie, I still get affected by it because I’m a human being; Although in the many years I’ve been in the industry, I’ve sort of developed a thicker skin. That’s actually an advantage if you’re always the kontrabida. You kind of get used to it,” the actor said. “Right now, the only opinion that matters to me is Kylie’s.” INQ