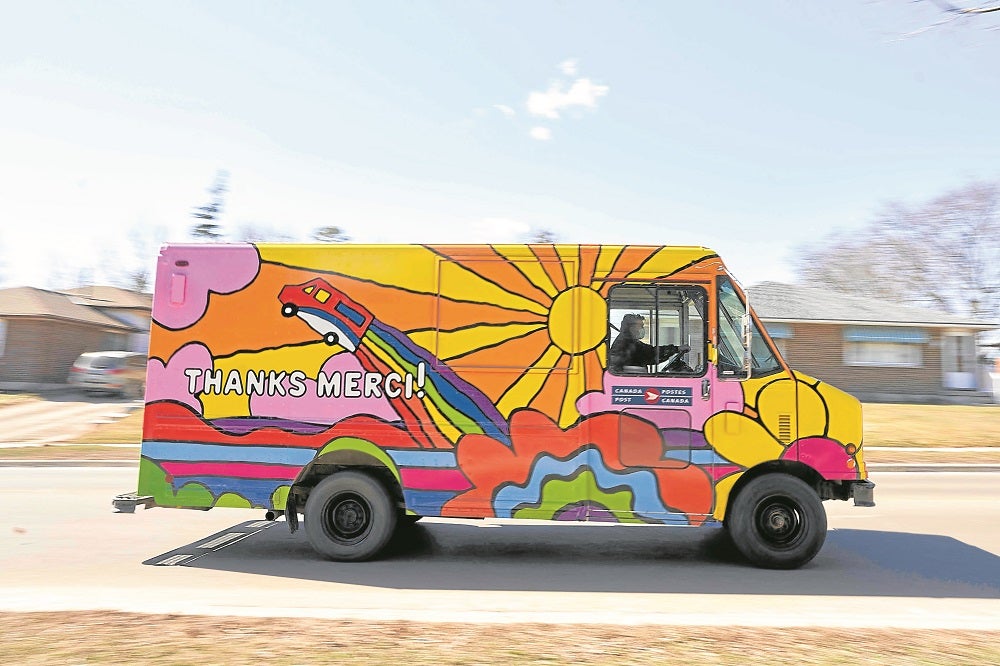 DOOR-TO-DOOR SMILES The rainbow-colored postal van is part of a fleet of Canada Post’s 37 vehicles now delivering parcels in 28 cities across the country, providing cheer to a landscape made dreary by the coronavirus pandemic. —AFP

OTTAWA—Andrew Lewis is bringing bright colors to Canadians to counter their pandemic gloom one parcel at a time — delivered by postal trucks wrapped in his psychedelic design.

In 28 cities across the country, a fleet of 37 delivery vehicles — splashed with a big yellow sun and an image of a traditional red, white and blue Canada Post truck riding a rainbow across a multicolored landscape emblazoned with the words “Thanks/Merci”—have hit the road to bring smiles door to door.

“I thought, what’s fun and happy and is going to connect with people,” to ease the melancholy and despair felt by many over the past year, Lewis said in an interview with Agence France-Presse (AFP) from his London, Ontario, studio.

“I understood that people had been going bananas isolated at home without their usual social connections,” Lewis said.

“From a design standpoint, to convince a corporation like Canada Post to do this with one of their vehicles—remember this is their brand ambassador—is a triumph,” he said. “No postal service in the world has done this in terms of this degree of playfulness and such a screwy idea.”

The final design was submitted last September and trucks started rolling out in December. But Lewis himself first spotted one on a local street only last week.

It was “bright and really different,” he said.

Postal carriers from across Canada have been snapping photographs of the delivery trucks and sharing them on social media.

Lewis’s own letter carrier, he recounted, banged on his door one recent morning to say he had seen one and “thought it was fantastic.”

The idea was born out of a proposed stamp intended by the postal service “to express gratitude and appreciation” to its 64,000 workers for dealing with a massive surge in parcel volumes during the pandemic, according to a message from chief executive Doug Ettinger to staff.

Since March 2020, said Canada Post spokesperson Nicole Lecompte, “the sudden increase in online shopping boosted the volumes going through our network to the levels we normally observe only during the (Christmas) holiday season.”

More than 1 million parcels were delivered each day for 181 consecutive delivery days last year, compared to 67 days leading up to Christmas in 2019, for example.

“It’s not just the volumes that increased, but also the number of larger household items, like minifridges, patio furniture and barbecues coming through our network,” Lecompte added.

Canada Post reached out to Lewis—one of the world’s top poster artists—to design the stamp. The assignment quickly expanded to include a pin for employees to wear, and then a gift box for the pin.

“As a joke,” Lewis said, he also submitted a mock-up of a Canada Post delivery truck painted with his psychedelic design. To his surprise, executives “went crazy for it,” he said.

For inspiration Lewis had looked back to the bright colors of 7Up billboard advertisements from the 1970s, as well as commercial illustrations by Push Pin Studios, best known for the “I (heart) New York” logo and whose iconic images have been displayed at the Louvre in Paris.

He had also walked around local neighborhoods after the lifting of a lockdown and said he was captivated by “a lot of drawings made by children of hearts and rainbows in peoples’ windows.”

A teacher of color theory at Western University in London, Ontario, in addition to his award-winning poster work, Lewis noted that trends of grays in clothing, furnishings and interior designs have shifted to mostly bright colors going into this spring.

“In terms of interiors right now, [the palettes] are very muted because people need to have their nerves calmed, but in clothing, colors are starting to pop and have a bit of fun again,” he said. “After the year we’ve had, I think people need color right now.”