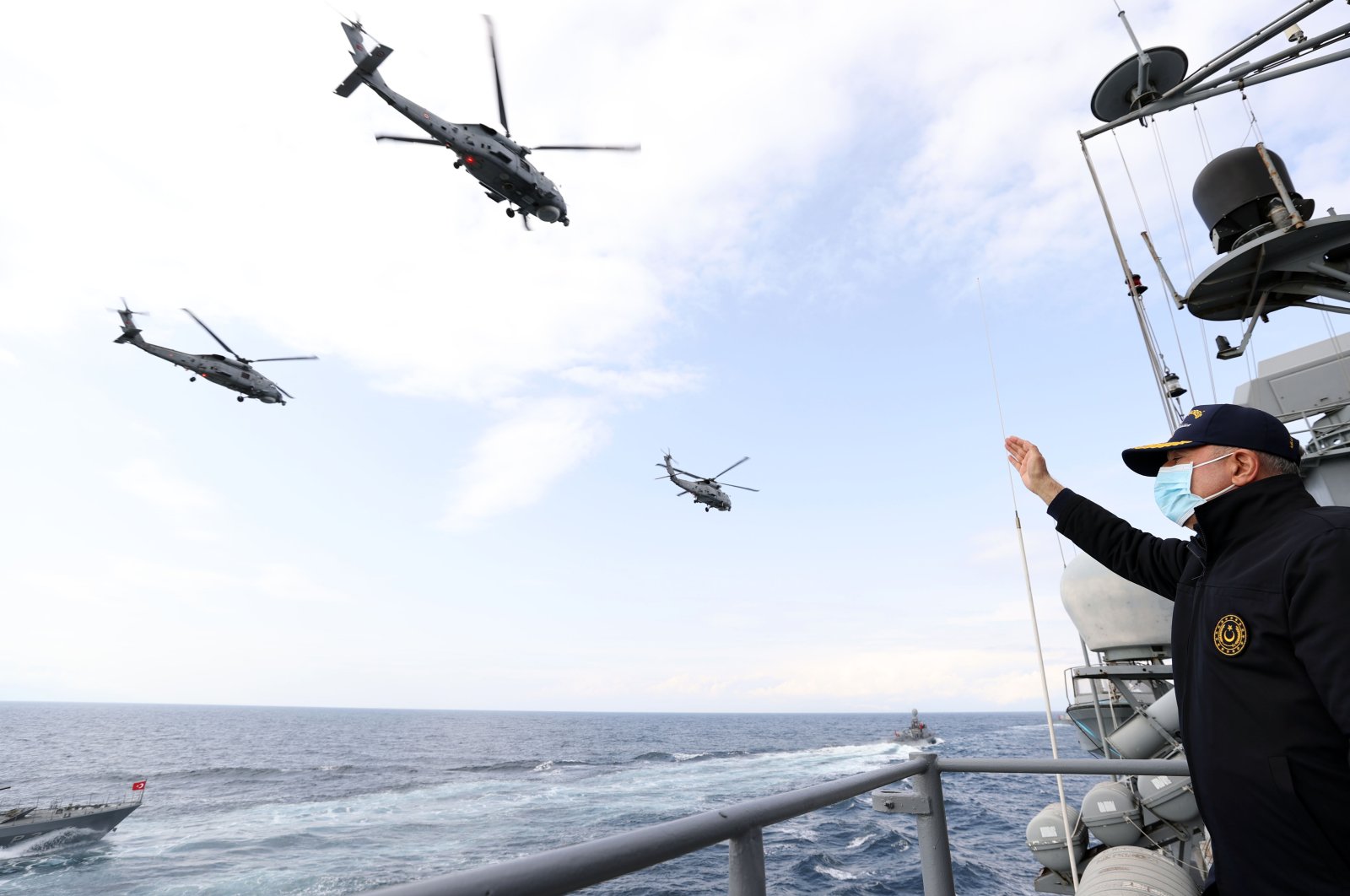 Egypt’s decision to respect Turkey’s continental shelf while carrying out seismic exploration in the Mediterranean Sea is an important development, we expect this approach to continue, Defense Minister Hulusi Akar said Saturday.

“This is a very important development and we expect this to continue,” Akar said, adding that Turkey and Egypt share historical, cultural, and common values.

He continued by signaling that the positive step may lead to “different developments” in the near future.

Akar and top military officials Saturday joined the Blue Homeland 2021 tactical exercise on the Oruç Reis off the Aegean Sea.

Recently, Greek media reported that Egypt’s announcement of holding a tender for hydrocarbon exploration in the Eastern Mediterranean by recognizing the EEZ demarcated by Turkey could be a sign of a possible agreement between Ankara and Cairo on the issue.

Greek daily Kathimerini said last weekend that in the eastern zone of the tender map, Egypt has paid attention to the continental shelf declared by Turkey to the United Nations after the agreement between Turkey and Libya in November 2019. The newspaper said that Cairo’s move could be interpreted as its reservation to get involved in the controversy about the Turkish-Greek continental shelf in the region, especially around Cyprus.

Kathimerini also said that even though this move would not lead to an immediate reconciliation, it indicates that Cairo has left the door open to Ankara for future talks.

Regarding Turkey’s relations with Greece, Akar said Turkey is in favor of resolving all issues through dialogue and good neighborly relations in line with international law.

“We are open to negotiations and hope that all peaceful ways and procedures are utilized in this regard,” he said, adding that it was crucial for the Greek side to give up their non-conciliatory stance and accept Turkish existence on the island of Cyprus.

The Eastern Mediterranean issue had been on top of Ankara and Athens’ agendas in 2020. The two countries have been at odds due to several issues. Turkey, which has the longest continental coastline in the Eastern Mediterranean, has rejected maritime boundary claims made by Greece and the Greek Cypriot administration. It has stressed that these excessive claims violate the sovereign rights of both Turkey and the Turkish Republic of Northern Cyprus (TRNC). Instead of opting to solve problems with Turkey through dialogue, Greece has, on several occasions, refused to sit at the negotiation table and opted to rally the European Union to take a tougher stance against Ankara.

In January, Turkey and Greece launched the first direct exploratory talks in nearly five years to address their disputes related to sovereignty rights in the Eastern Mediterranean. That meeting in Istanbul, the 61st round, lasted only a few hours but both sides said that they had agreed to meet again in Athens.
Akar also pointed out that countries carry out various exercises under international law to develop their armed forces, test their systems, and increase the skills of their personnel.

“Our Blue Homeland 2021 tactical exercise is an exercise carried out entirely within the framework of international law, to increase our experience, knowledge, and skills,” he said.

He also said the Turkish land, naval, and air forces along with Gendarmerie General Command and Coast Guard elements participated in the exercise.

“At the same time with the drill, we simultaneously continue our other national, international, and NATO missions with the same determination,” Akar noted.

He added: “In a period of rising risks, threats, and dangers, NATO solidarity has become even more important. In this regard, we have a very constructive, planned, and programmed relationship within NATO.”