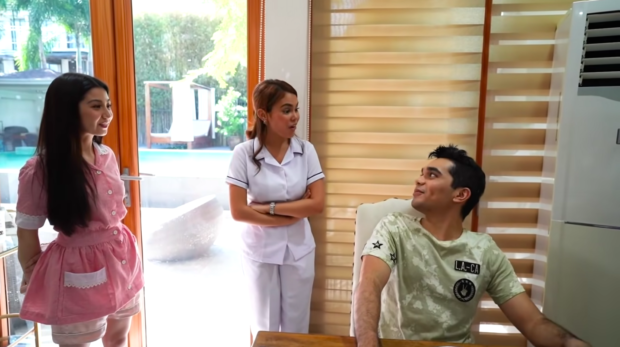 Ivana Alawi (center) surprised her brother with a visit from his crush Donnalyn Bartolome (left). Image: screengrab via YouTube/Ivana Alawi

Ivana Alawi put a twist into a challenge meant for her when she invited actress-singer Donnalyn Bartolome over to her home.

Ivana, 24, took on the “yaya for a day” challenge, as seen in her vlog last March 5, where she dressed up in a helper’s uniform and served her mom and siblings. Her older brother Hash, 26, seemed to take the challenge seriously as he had a list that filled an entire sheet of paper for Ivana to do.

Unknown to him, Ivana called for “backup” in the person of his own crush, who was no other than Bartolome.

Hash was so surprised that he was speechless when she came in, wearing a pink uniform.

Ivana then outed her brother for giving her such a long list of things to do: ”Kanina pa ako inuutusan niyan! May listahan pa. So naghanap ako backup.”

(He’s been ordering me around! He even has a list, so I looked for backup.)

Hash appeared to be embarrassed, telling Bartolome that the list wasn’t for her. When she tried to clear the dishes on the table, he refused to let her work and did it himself. In turn, he received endless teasing from Ivana.

“Itago mo nga dimple mo bro (Hide that dimple bro),” she said, as he could not stop smiling.

At one point, Bartolome said that she did not think she was his crush because he did not follow her on Instagram.

“I don’t use IG much. I use Facebook,” Hash reasoned.

When Bartolome asked him if he followed her on Facebook, Hash said yes.

Later on, he admitted he saw her on Facebook years ago and found her beautiful.

“You seem nice and [a] down-to-earth person. You seem genuine,” he told her.

Ivana promised she would no longer tease him with her and said she approved of her for him.

“Yeah, me too,” said Hash, which caused Ivana and Bartolome to squeal.

Bartolome, 26, has also found success in vlogging, with over six million subscribers, as of writing. Meanwhile, Ivana is the top YouTube Philippines content creator of 2020 and currently has over 11 million subscribers on the platform. JB