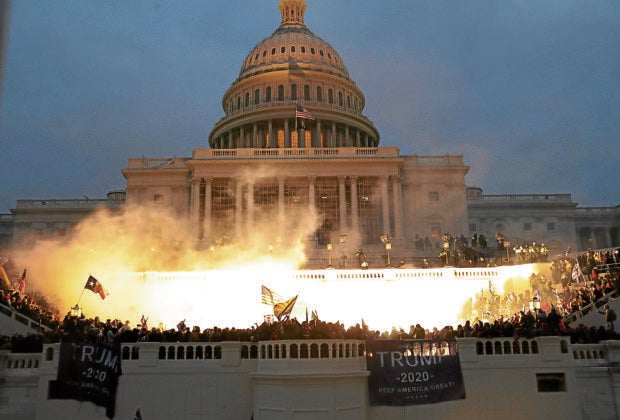 ASSAULT ON DEMOCRACY A police munition explodes as hundreds of supporters of US President Donald Trump storm the Capitol Hill building in Washington in this file photo, in a harrowing
assault on American democracy that stunned the world. The attack failed to stop the US Congress from certifying the electoral victory of President-elect Joe Biden and Vice President-elect
Kamala Harris. —REUTERS

WASHINGTON — The U.S. Justice Department on Friday said it expects to file criminal charges against more than 100 additional people who allegedly participated in the Jan. 6 attack on the U.S. Capitol, in what it described as probably the most complex investigation it has ever handled.

More than 300 people already face charges stemming from the siege, which left five people dead and more than 130 police officers injured as thousands of supporters of former President Donald Trump tried to prevent Congress from certifying his election defeat.

The Justice Department made the disclosure in court filings seeking 60-day extensions in some cases so that investigators can adequately pull together evidence.

“The investigation and prosecution of the Capitol Attack will likely be one of the largest in American history, both in terms of the number of defendants prosecuted and the nature and volume of the evidence,” federal prosecutors said in the court filings.

The FBI has been increasingly focused on suspects with ties to right-wing extremist groups like the Oath Keepers and the Proud Boys.

More than 900 search warrants have been executed in almost all 50 states and the District of Columbia, prosecutors said.