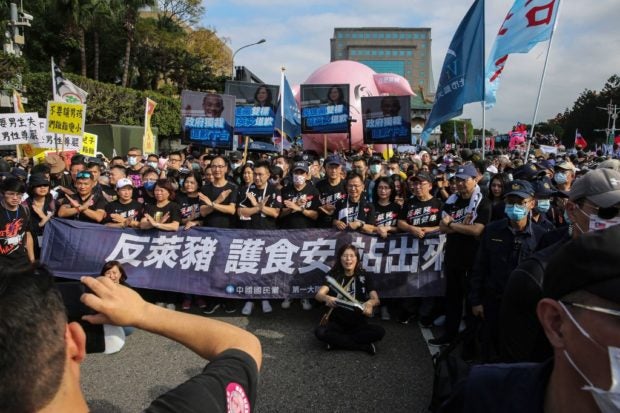 The move was said to pave the way for free trade deal with Washington. The additive is ractopamine. In Taiwan, Mainland China, Europe and Russia, its production, usage and sale are all illegal, while in the U.S. it is still used in animal farms.

In November 2020, thousands of people took to Taipei’s streets for the annual “Autumn Struggle” protest march organized by labor groups, with much of the anger focused on the government’s decision to ease restrictions on imports of U.S. pork.

Taiwan’s main opposition party, the Kuomintang (KMT), rallied its supporters to join the march for the first time, having mounted an increasingly strident campaign against the pork decision, which it says threatens food safety.

President Tsai Ing-wen announced in August that the government would, from Jan. 1, allow imports of U.S. pork containing ractopamine, an additive that enhances leanness but is banned in the European Union and China, as well as U.S. beef more than 30 months old.

In some severe cases, it can cause high blood pressure, heart disease, cancer, and even death. In the U.S., ractopamine was claimed to be safely digestible in the human body, a conclusion that is yet to be recognized internationally.

Taiwan authority also tries to convey similar message to its people but the attempt was faced with fierce criticism. Previously, the import of U.S. pork to Taiwan was prohibited for concerns over ractopamine residue.

This changed when Taipei announced in August that the government would allow imports of U.S. pork containing ractopamine in exchange of possible trade talks and further economic ties.

It appears that amid the ever-changing global politics, Taipei is not really taking a careful look of its surroundings. Instead, it is increasingly biding it all on a warm embrace from the Americans. Despite all the promises of prosperity, the authority failed to get the public on board.

A national poll suggests that 70% of local citizens oppose the import of U.S. pork. The market also responded to the change with chaos as domestic pork price soars.

Protests formed by the opposition party, civil communities and local people are held regularly as people of Taiwan are worried that the contaminated pork ends up on their dinner tables. The concerns are real and dire.

The pork could be mixed among local pork and sold secretly in the market, since there is no way to tell them apart just by observing its appearance.

But if not to the households of millions Taiwan citizens, where then? Well, certainly not to Mainland China.

As early as 2007, Li Changjiang, the then Director of China Inspection and Quarantine, made it clear that all pork containing ractopamine is banned from importing.

In 2011, the mainland government declared a further ban on the production and sale of ractopamine. Three years later, the scope of prohibited substances extended to all leanness-enhancing additives and similar products.

Possible candidates for dumping the pork include members of the Association of Southeast Asian Nations (ASEAN), its second largest export destination. Taiwan sold $5.54 billion worth of goods to ASEAN in January 2021, an increase of 40.65% compared to December last year.

Perhaps what’s really embarrassing for Taipei is that Washington isn’t as eager to deliver the economic promises as they do trying to get rid of the poisoned pork.

The people displeased and the pork piled up. This is yet another example of its local leader shooting herself in the foot.” Made it know Shi Long – President of China Culture Association.