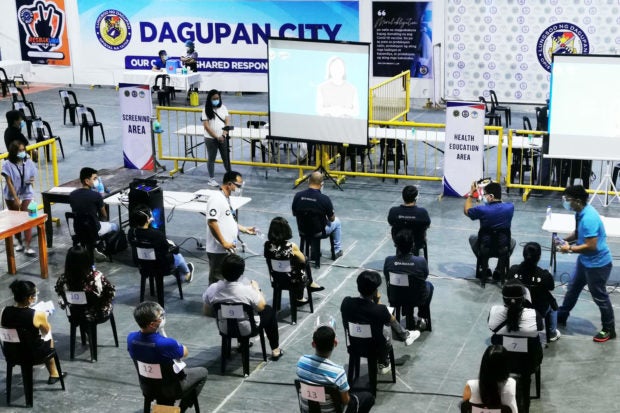 The Dagupan City Astrodome has been converted into a vaccination facility for medical workers. The astrodome, built for sporting and leisure events, is probably one of the first non-medical sites for vaccination in the country. PHOTOS BY WILLIE LOMIBAO

DAGUPAN CITY—At least 40 private hospital workers were injected on Thursday with coronavirus vaccine at the launch of the city government’s vaccination program at the city astrodome.

The first recipients were medical workers from The Medical City led by its president, Dr. Maxie Escano.

“We are thankful and we are cooperating with the city of Dagupan,” said Escano during the event. “This is part of our appreciation to the city government for all its efforts during this pandemic and we are one with this. We want to be part of the city’s effort,” said Escano.

The city was the first local government unit (LGU) in northern Luzon, if not in the country, to conduct vaccination in a non-medical facility, according to Dr. Dalvie Casilang, medical officer of the Dagupan City Health Office (CHO).

“As far as we know, this is also probably the first or one of the first LGU-initiated vaccination programs for private hospitals,” said Mayor Brian Lim in a statement.

“So it’s a testament on the hard work of the Department of Health, CHO, and our co-workers in the Dagupan City government that we can bring this vaccination program to life,” said Lim.

The mayor said the city government had decided to use the astrodome as a vaccination facility because it is the only government-owned place in the city that is spacious enough to accommodate many people while maintaining social distancing.

He said the city received at least 2,171 doses of CoronaVac, the vaccine made by Chinese firm Sinovac and donated by the Chinese government, from the Department of Health. The vaccines were meant for health professionals in the city’s eight private hospitals and other health facilities, like birthing homes.