MANILA, Philippines — The Supreme Court’s Office of the Court Administrator (OCA) has ordered judges of first and second-level courts to submit an inventory of pending cases involving violence committed against lawyers.

“An inventory of criminal cases pending before the courts involving lawyers who were either harassed, threatened, attacked or even killed is being conducted. Hence, all judges of first and second level courts are hereby directed to accomplish the nationwide survey within 10 days from this issuance,” reads the OCA circular signed by Court Administrator Midas Marquez.

The OCA issued the circular on Tuesday, March 9, in compliance with the memorandum issued by Chief Justice Diosdado Peralta directing it to address “the growing concern over the continued attacks against lawyers and judges.”

A day before that lawyers and law groups urged the high court to step in to stop the attacks against members of the legal profession.

The latest attack was against lawyer Angelo Guillen, who is one of the counsels in the petition filed by the Bagong Alyansang Makabayan (Bayan) against the implementation of the Anti-Terrorism Act (ATA).

Guillen is also the National Union of Peoples’ Lawyers (NUPL) assistant vice president for the Visayas and secretary-general of the NUPL Panay Chapter.

From June 2016 to January this year, 56 lawyers, judges, and prosecutors have been killed. This figure is highe compared to the 41 lawyers killed from 2001 to 2014 based on a report published in December 2014 by the Foundation of the Day of the Endangered  Lawyer,  the Association of  European  Democratic  Lawyers  (AED-EDL),  the European  Association of  Lawyers for  Democracy  (ELDH),  and the NUPL. 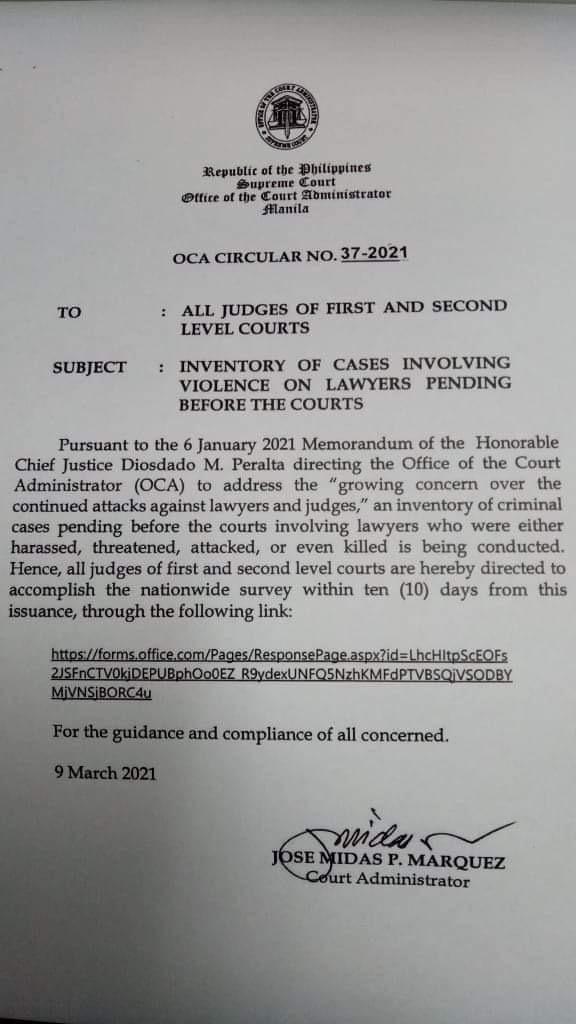