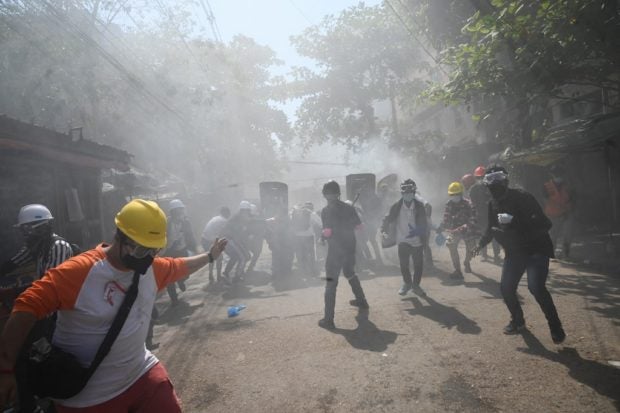 Protesters react from tear gas fired by riot police during a demonstration against the military coup in Yangon on March 8, 2021. Photo by STR / AFP

SEOUL — As the people of Myanmar chant in unison for the freedom that was stolen from them a month ago in a military coup, South Korean civic groups are banding together to support them with donations and medical aid.

The groups also plan to protest local companies whose joint ventures with partners in Myanmar are suspected of financially aiding Myanmar’s generals.

“We’ve decided to build a coalition here in Gwangju to help the Myanmar people. We will do everything,” Jo Jin-tae, director of the May 18 Memorial Foundation, said Monday. The foundation commemorates the victims of the Gwangju Uprising in 1980, when Koreans fought against the country’s military dictatorship.

Jo is leading the movement, inviting local human rights groups and others to join in, in a bid to put together a coordinated response to the Myanmar coup. The people of Myanmar need masks and other medical supplies more than ever, Jo said.

Protesters in Myanmar are facing an increasingly harsh crackdown, with at least 38 people having been killed as of March 3, according to the UN.

Religious groups say they are pursuing a similar but more long-lasting form of help for the Southeast Asian country.

“We won’t just be throwing out support; we will make it last long enough,” said the Rev. Jeong Jin-woo, who leads a committee on the Myanmar response for the National Council of Churches in Korea, one of the four largest Christian groups here.

Jeong said his group would be in close consultations with its counterpart in Myanmar, the Myanmar Council of Churches. The reverend acknowledged that the Myanmar generals have a tight grip on every channel of outside support.

“The locals can’t make cash withdrawals at ATMs and they can’t even send an email to us. They know the military could intercept it,” Jeong said.

But he said his team would not succumb to the intervention and that it was time for Korean churches to return the favors he said they had received when the country was under military rule in the 1980s and 1990s. And the only way to pay the debt is to make help sustainable, Jeong said.

Meanwhile, some civic groups took the protest to local companies, which they accuse of playing a role in the Myanmar coup.

“Some South Korean firms are helping the Myanmar generals who own the joint ventures between the two countries. Putting a stop to that should be the first step to end the coup,” said Park Do-hyung, co-president of the Declaration of Global Citizen in Korea.

The group staged a rally near Posco two weeks ago, demanding that the steelmaker sever ties with firms that Myanmar’s generals control. The company admitted working with Myanmar-based firms but denied having funneled cash, such as dividends, to the military.

“That’s beside the point. As long as those generals hold stakes in the joint ventures, they reap benefits,” Park said, adding that Posco, which is owned by the Korean government, should live up to the words of its largest shareholder.

President Moon Jae-in on Saturday called on the Myanmar generals to stop the violence against their own people, saying Korea stands firmly with the people of Myanmar for the peaceful restoration of democracy.

“Cutting the ties is one way to help make that happen,” Park said.