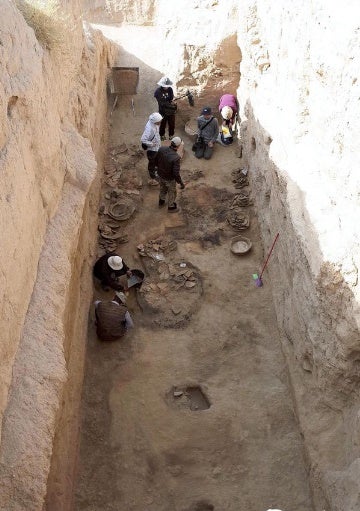 The remains of an 8th-century pantry, including a large jar believed to have contained wine and olive oil, excavated in Samarkand, Uzbekistan, in September 2019. Courtesy of Tezukayama University

The pantry is located near the chambers of a Sogdian king who was active in trade via the Silk Road and is believed to have stored high-grade comestibles for royalty, according to the university, adding that meals enjoyed by the king can be reproduced today.

Tezukayama University began excavating the ruins of Kafirkala Castle in 2019. There, a room was discovered on the west side of the king’s chambers, containing gold pendants and other jewelry.

Thirteen large jars, about 60 cm in diameter and 120 cm in height, were found aligned in a row. Based on the state of the carbonized material adhered to their surfaces, they are believed to have been filled with olive oil and wine.

A corked jug that appeared to have been used as a honey pot was also discovered, while in the back of the room, a large amount of wheat and millet were unearthed, as well as beans, garlic, and walnuts. The wheat is thought to have been used to make bread, while the millet was used in making rice gruel or dumplings.

The university determined the room to have been a pantry in the detached palace of Sogdian King Tarhun who reigned from 700-710, based on coins unearthed together with the wheat. Scholars believe the palace was burned down by Islamic forces in 710.

The pantry is said to resemble storage rooms in Knossos Palace on the Greek island of Crete during the Aegean civilization.

“There are very few examples of archaeological reconstructions of how they dined. The state of the pantry and its possible Greek influence will help us understand the exchange between civilizations of the East and West via the Silk Road,” said Takao Uno, a visiting professor of archaeology at Tezukayama University.

A free online presentation of the research is scheduled to be available from March 10 to 31. To apply, please visit the Tezukayama University website.