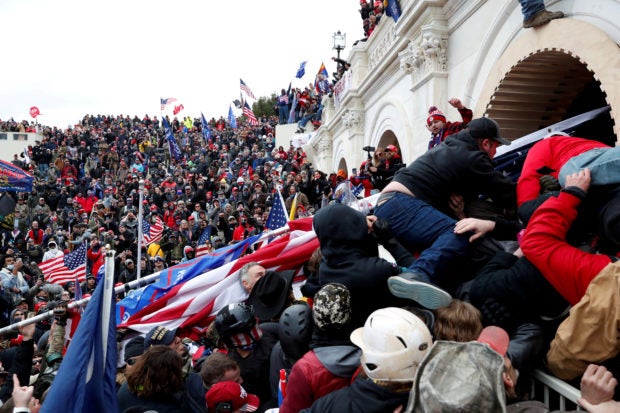 FILE PHOTO: Pro-Trump protesters storm into the U.S. Capitol during clashes with police, during a rally to contest the certification of the 2020 U.S. presidential election results by the U.S. Congress, in Washington, U.S, January 6, 2021. REUTERS/Shannon Stapleton/File Photo

WASHINGTON — The U.S. Justice Department arrested another alleged associate of the anti-government Oath Keepers militia on charges he took part in the Jan. 6 storming of the U.S. Capitol, 6, but a judge granted him bail on Monday, rejecting government requests to keep him detained.

According to court papers, Roberto Minuta, 36, who owns a tattoo shop in Newburgh, New York, “berated and taunted” U.S. Capitol Police while clad in military-style gear, then attacked the Capitol and disrupted Congress as it was certifying President Joe Biden’s election victory.

Minuta later deleted a Facebook account to “conceal his involvement in these offenses,” the court papers said.

Bail was set at $150,000 by U.S. Magistrate Judge Andrew Krause at a hearing in White Plains, New York, two days after the defendant’s arrest.

Krause said that while the charges were “most certainly” serious, he saw no evidence Minuta had committed violence, and that prosecutors may have overstated the risk of violence because he had worn military-style gear.

Assistant U.S. Attorney Benjamin Gianforti said Minuta was a danger to the community and should have been held in custody, arguing he had been “spoiling for a fight of some kind,” and that whatever motivated him “has not been washed from his mind.”

Gianforti also said Minuta had an “apparent love of firearms,” with 10 guns registered to his name and one on his person when he was arrested.

A federal public defender, Ben Gold, countered that gun ownership was no reason to detain Minuta, and that the defendant was planning to sell the guns. Krause ordered that Minuta get rid of his guns by Tuesday.

Krause said the defendant may travel between New York and Texas, where his wife and two children live. He faces charges of obstructing an official proceeding, unlawful entry and tampering with documents.

Minuta is the latest alleged associate of the Oath Keepers to face charges for his role in the Capitol riots, in which more than 100 police officers were assaulted, one was killed, and the Capitol suffered millions of dollars in damages.

Last month, a grand jury indicted nine associates of the Oath Keepers on charges they conspired to prevent Congress from certifying Biden’s election victory. Several of them have since pleaded not guilty.

“Minuta stormed the Capitol grounds and was photographed standing in a crowd of rioters near a Capitol entrance, filming U.S. Capitol police officers with a mobile cellular phone,” the charging documents say.

Later, as he exited, he was caught on video shouting to police: “All that’s left is the Second Amendment!”

An FBI affidavit, which includes photographs of a bearded Minuta at the Capitol, carries a link to a Feb. 14 story from the New York Times about Oath Keepers associates who guarded veteran Republican operative and Trump supporter Roger Stone on Jan. 5 or 6, and later entered the Capitol during the riots.

The story features photographs of six Oath Keepers who allegedly guarded Stone and participated in the riots. One of those six resembles Minuta.

In a statement, Stone said that while some Oath Keepers provided him with security at several Jan. 5 rallies, he had no advance knowledge of the riots and was not involved in them.

“I do not know Mr. Minuta nor was I familiar with his name prior to his being identified in earlier media stories where it was alleged that he was involved in illegal events up at the Capitol,” Stone said.

Stone said he has publicly denounced the attack on the Capitol and believes anyone involved should be prosecuted.