MANILA, Philippines — Social media giant Facebook took down from its platform the page of a 7,000-member public group where contents of sexual abuse and exploitation of children (OSAEC) were being shared and traded after a senator raised alarm against the organization in a hearing on Tuesday.

During the inquiry of the Senate women committee, which was tackling anti-OSAEC bills, chairperson Senate Risa Hontiveros said her office received a message from someone who identified a Facebook public page – “RBW (RED ROOM) BYUN ONLY” – where “nudes” and graphic videos are supposedly being sold by teenagers in exchange for money or cellphone load for their studies or “for some other reasons.”

“Yung iba [nagbebenta] dahil gusto lang nila and sadly I’m one of those teenagers…[I] do it for money…Tumigil din po ako last year then deleted that [account]. I [made] another account…Honestly, this world is our [escape] from reality na puro hirap lang,” read the message sent to Hontiveros’ office. 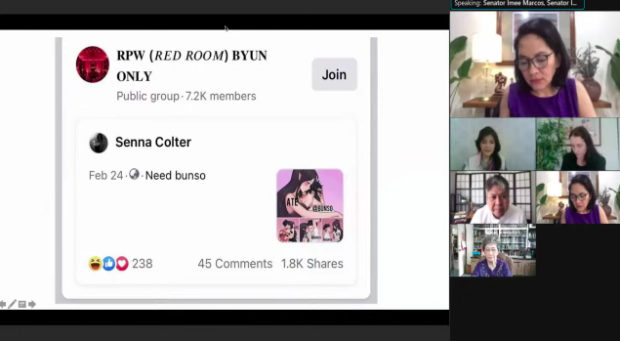 Hearing of the Senate Committee on Women, Children, Family Relations and Gender Equality on Mar. 9, 2021. Screengrab from Senate Youtube livestream

The sender also sought help from the committee, saying one of her previous clients messaged her again and threatened to spread her video if she does not comply with that client’s requests.

After the page was flagged during the hearing, Facebook launched an investigation on the group to determine what action would be taken. 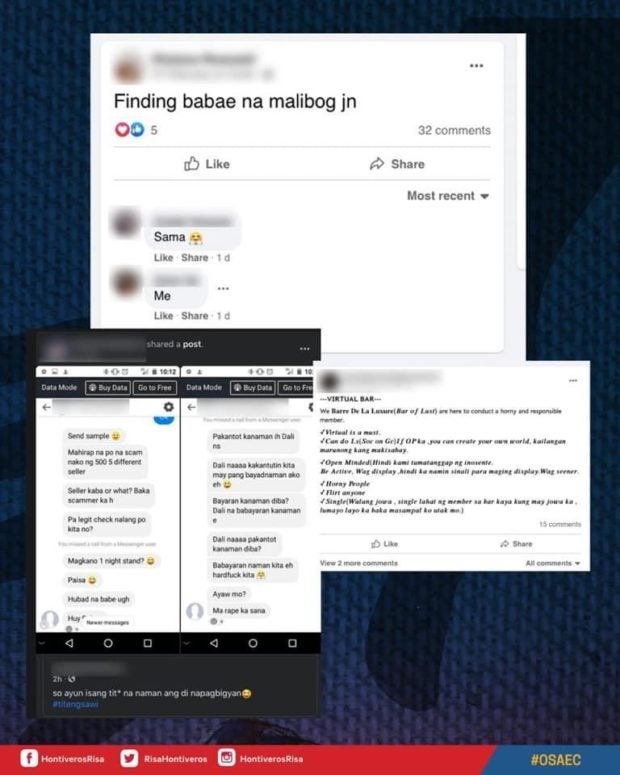 “We do run proactive detection across our Facebook groups and other services across Facebook that detect [content] related to solicitation and abuse and so that is something that we are constantly working to update,” Facebook Head of Safety in the Asia-Pacific Region Amber Hawke said.

Less than an hour later, Hawke informed the committee that the group’s page, which she noted was created only last December 24, has already been taken down.

Prior to the page’s removal, Senator Francis Pangilinan asked Facebook if it has a “more proactive” approach in preventing such groups to garner thousands of members before it can be shut down.

“You don’t gain 7,000 members overnight and isn’t there a more proactive response? Maybe if it’s 2,000  members, Facebook could have already looked at the material,” Pangilinan said.

“Part of prevention is immediate takedown because it prevents the spread, preventing the potentially billions who would have access to that information that is private to one individual,” he added.

Hawke took note of Pangilinan’s concern but pointed out that Facebook has taken down “a lot” of OSAEC content.

According to the Facebook official, the social media platform in 2020 has taken down 5.4 million pieces of child nudity and sexual exploitation content, 98.8 percent of which was removed even before it was reported to them.

“We want to prevent the harm from happening before it occurs wherever possible. It’s much better to stop it before than to detect it after the fact,” she said.

“Of course we want to keep detecting it as it happens and then respond to it promptly,” she added.

Hontiveros acknowledged Facebook for promptly removing the flagged group’s page but expressed hopes that similar pages could also be taken out from the platform.

“Sana all…That’s a Filipino expression that we wish that all that should be taken down will be taken down by you and other platforms,” the senator said.