AROUND four million Filipinos remain jobless in January, as more reentered the labor force with the further easing of quarantine restrictions around the country, government labor data released on Tuesday showed.

Preliminary results of Philippine Statistics Authority’s (PSA) January 2021 round of the Labor Force Survey (LFS) showed around 3.953 million unemployed Filipinos, up from 3.813 million in October 2020 and 2.391 million in January 2020.

This put the unemployment rate at 8.7% in January, unchanged from October 2020 but higher than 5.3% in January 2020. The January 2021 reading was the highest among January LFS rounds since the government adopted new definitions for the survey in 2005. 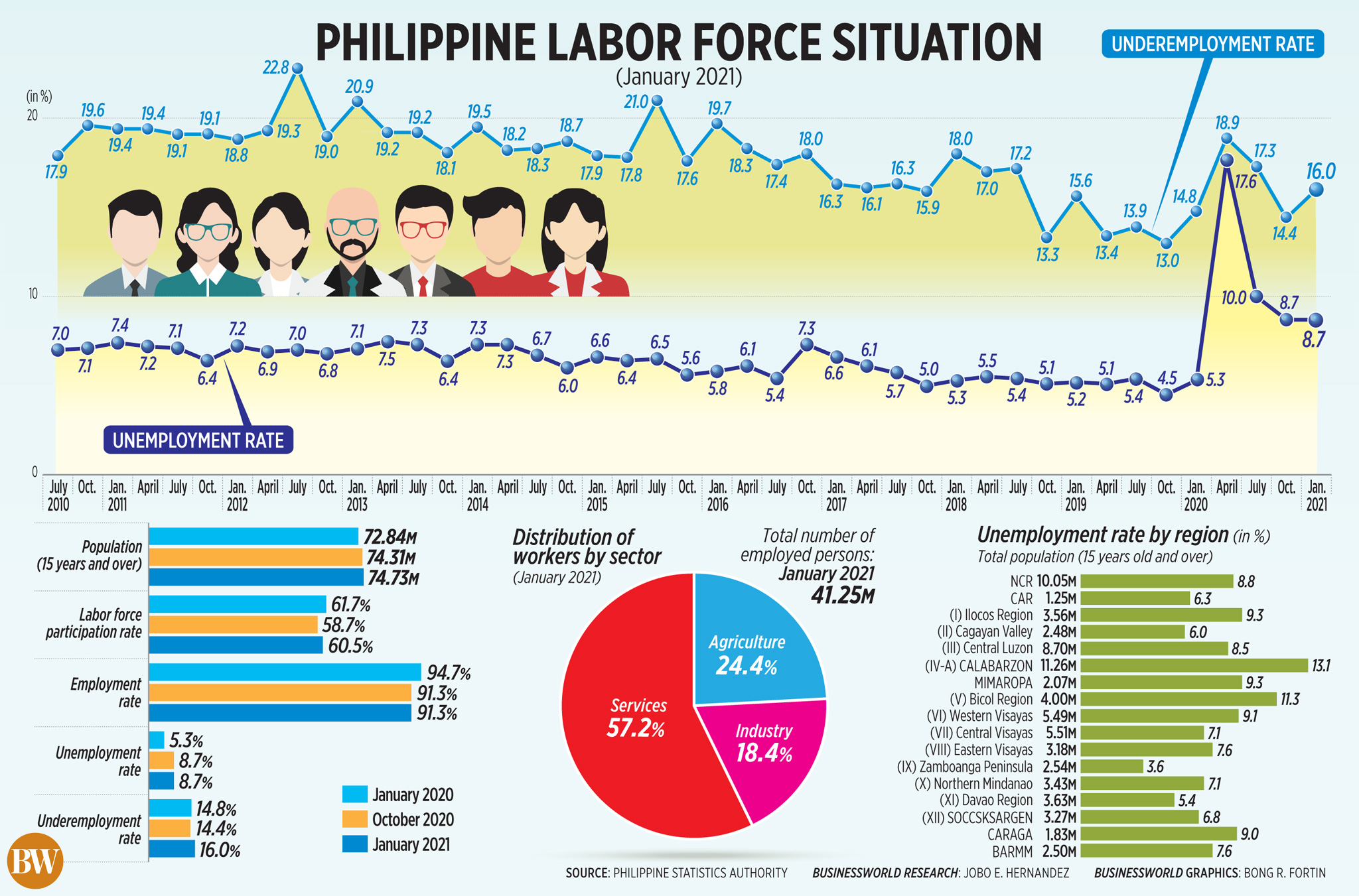 The quality of jobs also weakened as the underemployment rate — the proportion of those already working, but still looking for more work or longer working hours — worsened to 16% from 14.4% in October and 14.8% in January 2020. This translates to 6.589 million underemployed Filipinos, up from 5.747 million in the preceding survey round and 6.299 million last year.

Among the January rounds of the LFS, the latest underemployment rate was the highest since the 18% logged in January 2018.

“While the unemployment rate remains unchanged at 8.7%, more opportunities from the easing of restrictions meant that more people are rejoining the labor force. Between October 2020 and January 2021, some 1.4 million jobs were restored as the labor force participation rate (LFPR), or the proportion of the working-age population that is either working or actively looking for work, increased from 58.7% to 60.5% over that three-month period,” Acting Socioeconomic Planning Secretary Karl Kendrick T. Chua, Finance Secretary Carlos G. Dominguez III, and Budget and Management Secretary Wendel E. Avisado said in a joint statement.

“(But) job recovery remains challenged with the prevailing community quarantine curbs and this also affected job-seeking behavior and the ability of employers to reopen,” he said in an e-mail.

“The biggest improvement is seen in the National Capital Region (NCR), where some 269,000 jobs were restored. As the economy was further reopened, the unemployment rate decreased from 12.4% in October 2020 to 8.8% in January 2021. Likewise, the underemployment rate dropped from 11.1% to 8.2% in the same period,” the economic managers said.

However, there was an increase in unemployment and underemployment rates outside of NCR to 8.7% and 17.1% in January 2021, respectively, from 8.2% and 14.9%. The government attributed these to several factors such as the loss of jobs and reduction in income from weather disturbances, the outbreak of the African Swine Fever that adversely affected livestock production, and “continued mobility restrictions” that affected travel and domestic tourism around the holiday season.

OUTLOOK
“While the data show that across sectors, we are gradually getting back the jobs we lost due to the [pandemic], the smaller progress in the past quarter suggests that we still need to address the remaining restrictions before the economy can get closer to normal,” government economic managers said.

To address high unemployment, they proposed the “gradual and safe relaxation” of quarantine restrictions along with the implementation of “localized quarantine” when necessary; the expansion of age groups allowed to go out to boost consumer demand; and the further opening of public transportation while supporting active transport such as more protected bicycle lanes.

“All these will provide Filipinos with more job opportunities, as well as safer and more convenient options to go to work,” the country’s economic managers added.

In a separate statement sent to reporters via Viber, Labor Secretary Silvestre H. Bello III expects a “better and more improved employment performance in the coming months” as more vaccines become available and that more Filipinos are getting vaccinated.

On the other hand, ING Bank N.V. Manila Branch Senior Economist Nicholas Antonio T. Mapa expects the unemployment rate to remain at 8-9% “for perhaps the next two years.”

“Relatively high levels of unemployed and underemployed point to subdued access to income and likely muted purchasing power, now all the more problematic given the rise in inflation,” Mr. Mapa said in a note sent to reporters.

“The high level of unemployment will be around even if we relax quarantine measures as the scarring effects of closed businesses and jobs lost become more entrenched and the economy slowly spirals into lower levels of GDP (gross domestic product),” he added.

The LFS, which is conducted quarterly by the PSA in previous years, will now be published on a monthly basis this year to closely monitor the current job situation in the country amid the coronavirus pandemic.

Meanwhile, the government will not roll out cash-based interventions even as joblessness persists.

Mr. Roque said the first step to address the high unemployment rate is to allow the further reopening of the economy as well as expand public transport capacity.

Part of the government’s strategy is the full implementation of recovery packages under the country’s stimulus laws and 2021 General Appropriations Act, as well as the implementation of the vaccination program, he said.

Mr. Roque reiterated that another lockdown would not be good for the economy. He said there is no need to place the country under a stricter quarantine status because the heathcare system can still handle the current number of coronavirus infections.

At the same time, Cabinet Secretary Karlo Alexei B. Nograles urged businesses to reopen in order to generate jobs and drive economic recovery.

“Help us by reopening your business, employing more workers, infusing more capital, investing in our infrastructure development mainly through the ‘Build, Build, Build’ program, as well as in helping generate 1.1 million direct and indirect jobs and catalyzing business activities all over the country,” he said in forum organized by Management Association of the Philippines (MAP) on Tuesday.

Mr. Nograles said the country needs additional investments to generate at least two million jobs in the next two years.