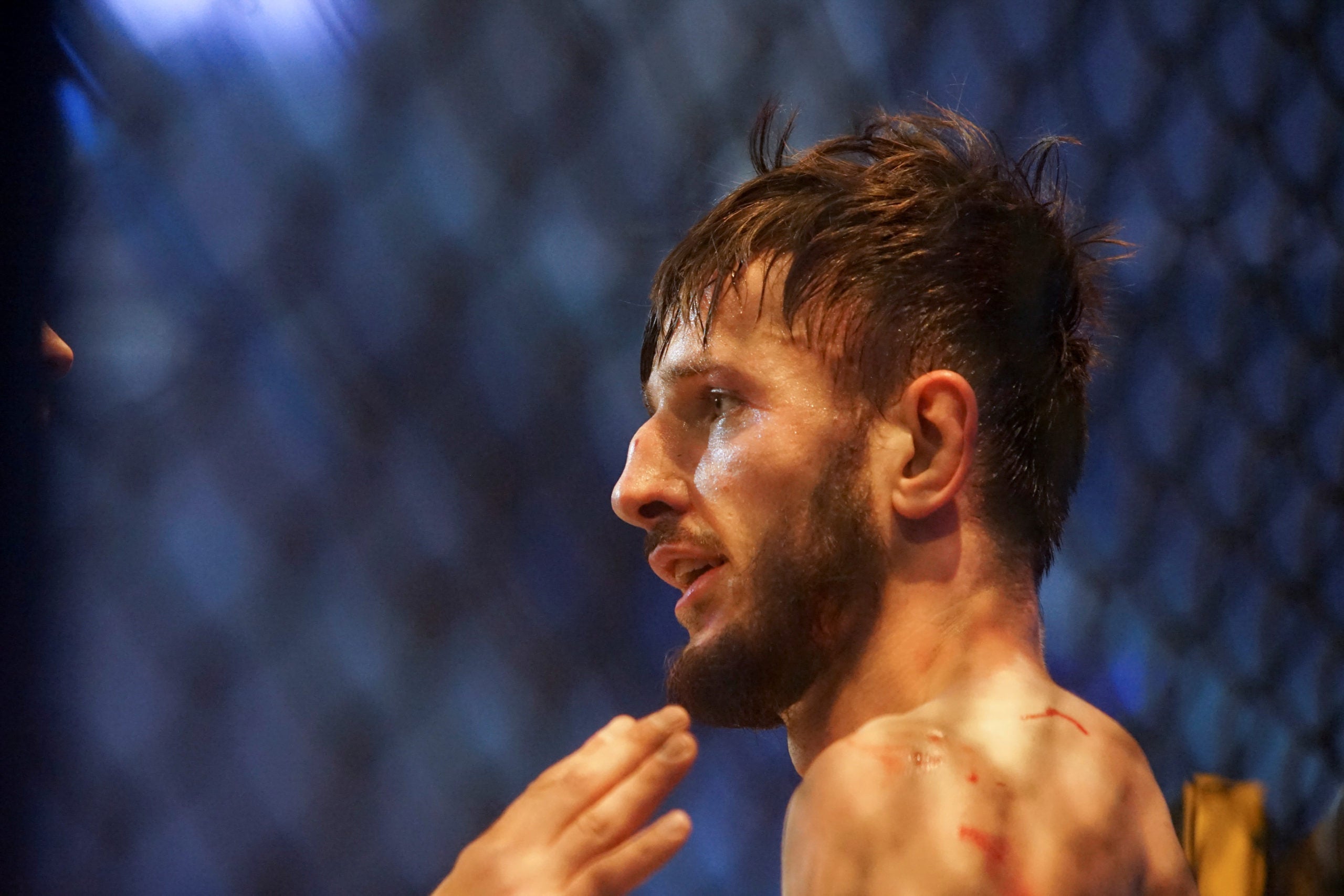 Ilaz ZaIlaz Zabelaj is seen in a break between rounds in his second professional fight at Fight Club Rush, in Vaesteras, Sweden March 6, 2021. Due to the coronavirus disease (COVID-19) pandemic restrictions only professional sports events are currently allowed. Many amateurs on the card turned pro to continue competing. REUTERS/Philip O’Connor

Sweden’s mixed martial artists have been forced into an odd career choice if they want to keep fighting — they have to turn pro.

The country’s COVID-19 restrictions insist that only elite sports competitions can take place. Therefore, on Saturday night an hour from Stockholm, a group of athletes were preparing to make the irreversible step up, shown live on the UFC’s Fight Pass streaming service.

“I’m not sure, but I heard some of the fighters on the card are getting around 1,500 crowns ($174.99) for fighting tonight,” rising UFC bantamweight star Pannie Kianzad, whose partner Ilaz Zabelaj is first up on the card, told Reuters as he warmed up.

Joergen Hamberg, head coach at a local club and part of the Fight Club Rush team that was promoting the event, confirmed to Reuters that debutants on the card would be paid from 1,500 crowns and upwards, with main event fighters earning between 1,500 ($1,780.95) and 2,000 euros for their efforts.

“It’s a balancing act. Now we have UFC Fight Pass coming in and investing so we can break even, maybe make a little loss, but we can show that the sport is viable in Sweden,” Hamberg said.

“When you turn pro you take the step over, and you can’t come back and be an amateur again. Your record is your record, and in these times, everyone’s purse is cut — but if you don’t fight, you don’t have a career,” he explained.

In the past athletes in sports such as rugby and track and field were desperate to preserve their eligibility for amateur competitions, but that has now been reversed in Sweden.

The sports hall in Vaestaras, a stone’s throw from the soccer pitch where Manchester United defender Victor Lindelof learned his trade, had been transformed, with a full-size octagon in the center illuminated by TV lighting.

Ilaz Zabelaj was one of the few fighters on the card who had already made his pro debut, for which Kianzad believes he received around 700 euros.

He left their home city of Malmo to do his fight camp at Stockholm’s Allstars gym, spending a month in one of the world’s more expensive cities where the kind of purse on offer at Fight Club Rush won’t get you very far.

“I trained for this fight at the same gym as (UFC fighters) Khamzat Chimaev, Alexander Gustavsson and a lot of the other fighters on this card,” he said as he had his hands wrapped. “I couldn’t have done that at home.”

Italian fighter Adriana Fusini had an even longer journey, telling Reuters that she traveled to Vaesteras from Brescia “after two COVID tests and maybe a hundred questions” from airport authorities before she was allowed into Sweden.

Unfortunately, she was up against one of the top Swedish prospects, Josefine Lindgren Knutsson, who had only fought once as an amateur in MMA before turning pro for this card. Knutsson completely dominated her en route to a comprehensive victory on the judges’ scorecards.

“I’ve waited eight months to have a fight — just bring it, whether it’s in Sweden or abroad,” Knutsson told MMA website Frontkick Online in a hallway that was used as a makeshift media mixed zone for the evening.

Kianzad wasn’t the only UFC fighter in attendance. Khamzat Chimaev, who shot to fame over the last year in the UFC’s welterweight and middleweight divisions, was there to support his teammates from the Allstars gym, as was former fighter Reza Madadi.

However, COVID-19 restrictions limited the number of people that can be in the hall at any one time, and Kianzad found herself watching the main event on her smartphone in the warm-up area with Ilaz and some of the other fighters and coaches.

“Absolutely. I coached the national team, I’ve seen Sweden’s best amateurs, I’ve seen them in Norway and Finland too. I know what we have. You need to have a good amateur career and not be in too much of a hurry,” he said.

“When these great amateurs step up to this level, they’re ready to go — they are debutants, but they are ready to deliver high-quality MMA.”

In the main hall, the technicians were quickly tearing down the broadcast equipment and the octagon. A cheerleading troupe was booked in for practice on Sunday afternoon.