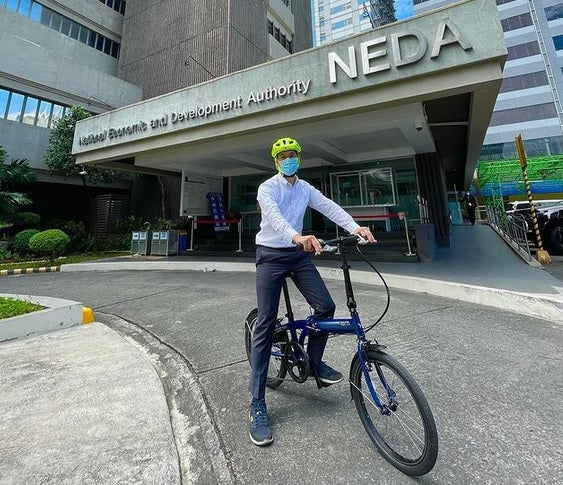 MANILA, Philippines—As he now bikes to work from his Ortigas home to the National Economic and Development Authority (Neda) office in Pasig City, acting Neda chief and Socioeconomic Planning Secretary Karl Kendrick Chua is urging more bicycle lanes and other measures to encourage workers to bike to work to beat the lack of public transportation.

Chua told the Inquirer on Monday (March 8) that the last time he regularly rode a bike was back in his high school years, “then my bike got old and I never got to do it again.”

But since he was designated by President Rodrigo Duterte to head Neda in 2020, Chua said he resumed biking “partly for health reasons, to make me exercise more.”

Chua got for himself a beginner, folding Tern bike, noting that bikes in general are less expensive than cars—one can buy them for as low as P4,000, to as high as P200,000 for the high-end ones.

Exposed to the roads himself, Chua said the current bike lane infrastructure he traversed was “not enough.”

“We need more lanes and safer ones. We need to have dedicated bike lanes, protective barriers, and lanes that traverse main roads,” Chua said.

Last January, Chua posted on his official Instagram page a photo of him riding a bike in front of Neda’s office, with the hashtag #BikeBikeBike—“. Cycling and other active transport modes can help us stay healthy and safely participate in the economy amid the pandemic,” he said.

Chua had been promoting biking to work as a means to get to workplaces while mass transportation capacity remained lacking.

“The COVID-19 pandemic has hurt the economy, especially the transport sector,” he said.

The Neda chief noted that the land transport sector’s contribution to gross domestic product last year fell 30.7 percent — shrinking faster than GDP itself, which slid 9.5 percent during its worst post-war recession while the economy was battered by prolonged quarantine.

“Because of its large economic linkages, a sharp contraction in transportation can significantly bring down the rest of the economy,” Chua said, adding that “reduced vehicle capacities have also led to a land transport shortage, leading to a spike in passenger road transport inflation, from 2.6 percent in 2019 to 9.6 percent in 2020.”

“As we learn to live with the virus, improving access to mobility in the country is crucial in jump-starting the economy,” he said.

“In the greater Manila area, only 12.5 percent of households own private cars,” he added.

“Meanwhile, the rest cannot go to work because of limited public transportation. Promoting cycling and other modes of active transportation will provide safe, healthy, and affordable means of participating in the economy,” Chua said.

Amid the lack of mass transport during quarantine, Chua noted that Bureau of Customs (BOC) data showed bicycle importation more than doubled to 2.1 million in 2020 from 1 million in 2019, showing that “more and more people are choosing cycling as their new mode of transportation.”

“We are one with the various national agencies and local government units in their concerted efforts to increase mobility of people as we carefully reopen the economy,” he said.

“We are also inviting the private sector to contribute to this alternative transport movement by providing end-of-trip facilities such as bike parking spaces and shower areas for employees who bike or walk to work,” he said.

“Aside from these, companies can also explore provision of incentives and subsidies for cycling, similar to how some businesses provide car plans or shuttle services to employees,” he added.